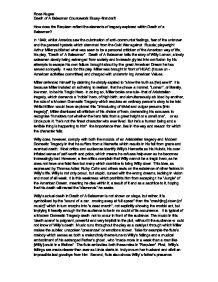 How does the Requiem reflect the elements of tragedy explored within Death of a Salesman?

How does the Requiem reflect the elements of tragedy explored within Death of a Salesman? In 1949; whilst America saw the culmination of anti-communist feelings, fear of the unknown and the general hysteria which stemmed from the Cold War against Russia; playwright Arthur Miller published what was seen to be a personal criticism of the American way of life, his play, "Death of A Salesman". Death of A Salesman tells the story of w***y Loman, a lowly salesman slowly being estranged from society and increasingly led into confusion by his attempts to escape his own failure brought about by the great American Dream he has served so loyally. It was for this play Miller was brought in front of HUAC (house un-American activities committee) and charged with undermining American Values. Miller defended himself by claiming he simply aspired to "show the truth as [he] saw it". It is because Miller insisted on adhering to realism, that he chose a normal, "Loman", or literally, low man, to be his Tragic Hero. In doing so, Miller broke one rule- that of Aristotelian tragedy, which demands a "noble" hero, of high birth; and simultaneously abided by another, the rule of a Modern Domestic Tragedy which requires an ordinary person's story to be told. ...read more.

It is perhaps important to consider the role of 'ghosts' or past figures which appear throughout the play. Ghosts and figures from the past litter tragedy throughout the centuries. Indeed, the oldest surviving complete tragedy, Aeschylus's Persians (472 BC) features the ghost of the dead King Darius returning from the past to cast judgement over his son Xerxes, whom he deems to be failing in his role and pursuing the wrong dreams. This is not unlike the mocking presence of w***y's own father and his brother Ben, both deceased who continue to taunt w***y with dreams he cannot achieve. w***y's suicide is at once self-congratulating, misguided and selfless. He wants to escape the feeling he is "temporary" by truly leaving something behind, "something one can feel with the hand". This something is his "diamond" of the $20,000 insurance money, which will make him a "hero" for Biff to "worship" and helping Biff to start up a business of his own. Requiem holds no answers as to whether the premium was paid and through this and the melancholy despair that runs through the final scene, Miller shows how pointless w***y's death truly was. No matter how much money he leaves behind, it will never compensate for the loss the family has to endure. ...read more.

Everything reverting back to the way the play started shows how insignificant w***y's death really is. Capitalism does not crumble, life goes on. It is here that I believe Modern Domestic Tragedies are flawed, where Shakespearian ones are not. When Macbeth dies, the audience is certain that his Kingdom will mourn his loss, however warped he was, he was still their King. There will be a "massive" funeral, of the sorts w***y dreams of, and a Kingdom-wide expression of collective grief. It is this grief that I believe provides the catharsis of emotion for the audience, they know his death will continue to be felt after they leave the theatre and this assurance brings closure. This closure however, does not exist in Modern Domestic Tragedies. w***y's death will go unnoticed by most, and this does not bring significant catharsis to the audience. There is no final completion of raw emotion. To support my view I can only offer the words of Shakespeare himself, "The poor beetle on which we tread In corporal sufferance feels a pang as great As when a Giant dies." Or in other words, an ignoble death such as w***y's is just as pitiful as those of Shakespeare's noble giants and therefore I feel robbed of a glorious ending for w***y which would lift him to the level of Kings, as unfitting as it may be. ...read more.

This essay only begins to respond to the question half way through! When the question is specifically asking you about a scene in a play, you must begin your argument there, and then use other parts of the play to ...

This essay only begins to respond to the question half way through! When the question is specifically asking you about a scene in a play, you must begin your argument there, and then use other parts of the play to back up any points formed. I would be wary of starting an essay on the whole play being a tragedy when the question is so specific. When the essay begins to look at the Requiem, there is some good discussion. Looking at irony and the cyclical nature of Willy's death are great ways to explore tragedy, but this needs to be taken further to discuss how the audience respond to this.

The analysis here has potential. Comments such as "However, a few critics complain that Willy cannot be a tragic hero" are good, but I would note you should be careful not to give a balanced argument. It is much stronger at A-Level to acknowledge the counter-argument, and then explain why it is weaker than your argument. The paragraph on irony is strong, looking at the connotations of language used, but I would've liked slightly more focus on the tragedy of Willy. If I were doing this essay, I would've linked "Happy will continue to pursue it" to the helplessness of the audience to prevent Happy's similar downfall, showing the power of the American Dream in causing a tragic downfall. Catharsis is explained well, and this is a high level concept examiners will be pleased to see explored.

This essay has an awful structure. As mentioned above, it doesn't really engage with the question until a few paragraphs in. The introduction is exactly what examiners don't want to see: a group of irrelevant contextual points with a short plot summary and no engagement with the task. Similarly, ending with a Shakespeare quote does nothing to your argument. In fact, it probably worsens your argument as you have lost the opportunity to end with a insightful conclusion. There are times where this essay uses the first person, and I would advise against this. A personal tone is not appropriate for A-Level, and it weakens your argument as it makes your views seem more personal rather than backed by evidence and analysis.