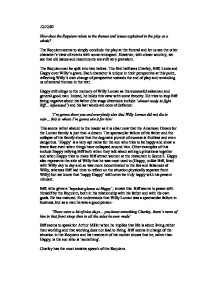 How does the Requiem relate to the themes and issues explained in the play as a whole?

12/12/02 How does the Requiem relate to the themes and issues explained in the play as a whole? The Requiem seems to simply conclude the play at the funeral and let us see the other character's view of events with some retrospect. However, with closer scrutiny, we see that old issues and resentments are still very prevalent. The Requiem can be split into two halves. The first half sees Charley, Biff, Linda and Happy over w***y's grave. Each character is unique in their perspective at this point, reflecting w***y's own change of perspective towards the end of play and reminding us of several themes in the text. Happy still clings to the memory of w***y Loman as the successful salesman and general good man. Indeed, he holds this view with some ferocity. He tries to stop Biff being negative about his father (the stage directions include 'almost ready to fight Biff... ...read more.

but we know that 'happy Happy' will never be truly happy with his present mindset. Biff, who gives a 'hopeless glance at Happy', knows this. Biff seems to peace with himself by the Requiem, both in his relationship with his father and with his own goals. He has matured. He understands that w***y Loman was a spectacular failure in business, but as a man he was a good person- 'There were a lot of nice days... you know something Charley, there's more of him in that front stoop than in all the sales he ever made' Biff seems to speak for Arthur Miller when he implies that life is about living rather than working and that working does not lead to living. Biff seems in charge of the situation in the Requiem and his treatment of his mother shows that he, rather than Happy, is the son who is 'something'. ...read more.

This seems to contradict earlier assumptions that Linda knew w***y's mind like the perfect wife. Instead of seeing the inevitable, as Charley does, or being somehow released like Biff, she can only see things in terms of money and time, like w***y used to obsess over- 'He even finished with the dentist'. The second half of the Requiem is dedicated to Linda. It is quite hard to understand. She says that she 'can't cry' but then seconds later she is 'sobbing more fully'. Why is this? Maybe telling her true feelings to w***y instead of suppressing them like when he was alive releases her, but she keeps repeating 'we're free'. As she whispers this she seems to be on a higher plane and connecting with w***y. This, however, is open to interpretation and all we can safely say is that the Requiem releases the pressure that was mounting in the Loman household in possibly the only way it could; with the realisation of the failure of the American Dream. Ben Sellers. ...read more.