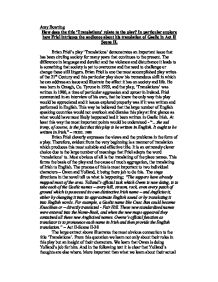 How does the title 'Translations' relate to the play? In particular explore how Friel intrigues the audience about his translation of Gaelic in Act II Scene II.

Amy Bowring How does the title 'Translations' relate to the play? In particular explore how Friel intrigues the audience about his translation of Gaelic in Act II Scene II. Brian Friel's play 'Translations' demonstrates an important issue that has been circling society for many years that continues to the present. The difference in language and derelict and the violence and disturbance it leads to is something that society is yet to overcome and the need to challenge or change these still lingers. Brian Friel is one the most accomplished play writes of the 21st Century and this particular play show his tremendous skill in which he can address an issue and illustrate the affect it has on society and life. He was born in Omagh, Co. Tyrone in 1929, and the play, 'Translations' was written in 1980, a time of particular aggression and uproar in Ireland. Friel commented in an interview of his own, that he knew the only way this play would be appreciated and it issues explored properly was if it was written and performed in English. This way he believed that the large number of English speaking countries would not overlook and dismiss this play at first glance as what would have most likely happened had it been written in Gaelic Irish. At least this way the most important points would be understood - "...the sad irony, of course, is the fact that this play is be written in English. It ought to be written in Irish." ...read more.

OWEN - "Never." YOLLAND - "O my God!" Pause. They stare at one another. Then the absurdity of the situation strikes them suddenly. They explode with laughter. Owen pours a drink. As the rolls about their lines overlap...." - Act II-Scene I-Page 55 The quotation above comes from a scene in which these two characters represent optimism for the relationship between the English and the Iris. There is hope as we see these two characters working together. This is quite different from the disaster into turns into in Act III. Owen now wishes to have no connection with the English and Yolland has been killed. It is as if the two characters that personified hope, had had their ambitions, which represent the want for the Irish and the English to accept each other, flattened and destroyed. Hugh's last speech sums this up. "And it was the goddess's aim and cherished hope that here should be capital of all nations - should the fates perchance allow that. Yet in truth she discovered that a race was springing from Trojan blood to overthrow some day these Tyrian towers - a people kings of broad realms and proud in war who would come fourth for Lybia's downfall..." - Act III-Scene I-Page 91 Hugh recognises that the Irish and English would never be able to connect properly without the feeling of domination from the English. One of Friel's important forms of translation is apparent at the beginning of the play. ...read more.

The do not realise they are saying the same thing. The irony is that they both say they want to be together forever but later Yolland goes missing and is believed dead. It is important that we recognise how the audience follow the script and understand that they don't speak the same language. We take this for granted, as it is the skill of the writer who allows us to understand. As Marie ad Yolland cannot speak to same language they go into extreme detail when explain how they feel. This means the audience learns exactly how they feel. By explaining deeply the characters believe they will understand each other better. This coincidentally works terrifically for the audience as they can learn more and more about the characters and their feelings. The few word that both understand in one or other languages are selective, significant one. When Marie tries to converse in English the words she recognises are 'Earth', 'Fire' and 'Water', words which are essential to life. Yolland on the other hand uses word more connected to the novel by reciting the Irish names that he has been translating to English. I think Friel has made it clear in both their characters their want to learn each other languages. It is Yolland and Marie, along with Owen, are the characters that want to resolve the conflict and get on with each other. Yolland has made it clear from the beginning his wish to speak Irish, just as Marie has done with her wish to speak English. Ironically by the end of the play Yolland has murdered and Owen wishes to have no connection with the English. ...read more.