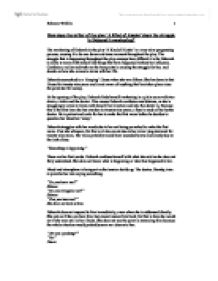 How does the writer of the play 'A Kind of Alaska' show the struggle in Deborah's awakening?

How does the writer of the play 'A Kind of Alaska' show the struggle in Deborah's awakening? The awakening of Deborah in the play 'A Kind of Alaska' is a very slow progressing process, causing it to be one drawn out tense moment throughout the play. The struggle that is happening throughout the play conveys how difficult it is for Deborah to come to terms with herself and things that have happened without her influence. Confusion, reality and truth are the key points in causing the struggle for her, and decide on how she comes to terms with her life. Deborah succumbed to a 'sleeping' illness when she was fifteen. She has been in that illness for twenty-nine years and is not aware of anything that has taken place since the point she fell asleep. At the opening of the play, Deborah finds herself awakening in a plain room with two chairs, a table and the doctor. This causes Deborah confusion and distress, as she is struggling to come to terms with herself, her location and who the doctor is. Because this is the first time she has awoken in twenty-nine years, a fuss is made of her by the doctor. He is patient and waits for her to make the first move before he decides to question her about her 'sleep'. Deborah struggles with her words due to her not being provoked to make the first move. First she whispers, for this is all she can do due to her voice lying dormant for twenty-nine years. Her voice probably would have sounded hoarse and croaky due to the lack of use. "Something is happening." These are her first words. Deborah confuses herself with what she said as she does not fully understand. She does not know what is happening or what has happened to her. Mood and atmosphere is being set as the tension builds up. ...read more.

The drug used to wake her up is only temporary, be she is not aware of that. It will be a struggle for her when she realises she will fall back to sleep sooner or later. From the way she speaks about her sister we get the impression that she liked to act a lot older than she was. She talks about her younger sister Pauline in a very mature manner, using unusual words a fifteen year old isn't expected to understand, let alone use in their vocabulary. "I'm not prepared to tolerate her risible, tendentious, her eclectic, her ornate, her rococo insinuations and garbled inventions." This suggests to the audience that Deborah might have felt slightly insecure with her position in the house. She is trying to sound sophisticated, and as she is the second oldest sister out of the three she might have felt the need to act older than she is as a role model for her younger sister. Because her mother expected a lot of her she might have felt the need to prove herself as a responsible daughter who is able to earn her parents trust. She feels that acting more mature she feels is the best way to do this. This shows that not only is Deborah struggling to understand what is happening now, but also she struggled to find herself when she was younger. Deborah doesn't understand Hornby when he tries to explain to her that she just 'stopped'. He uses words like 'sleep' when he doesn't specifically mean sleeping, which confuses Deborah. "You fell asleep and no-one could wake you. But although I use the word sleep it was not strictly sleep." "Oh make up your mind!" Deborah is struggling to understand what he means by the term 'sleep', as this is what Hornby keeps referring her illness to be. When he says it is not a sleep, she gets confused and finds it difficult to process the information given to her. ...read more.

At this point I think the information has finally sunk in and she is trying to come to terms with it. She is struggling to come out of herself and is afraid of falling back into her illness. When she stops flicking herself and becomes still she describes what it is like in her illness. "You can't imagine how still it is. So silent I can hear my eyes move...People bend over me, speak to me. I want to say hullo, to have a chat." She comes back into reality and accepts that she is old, and is curious of her appearance. She admits she has no intention of looking into a mirror. This could be because she is frightened of actually seeing the truth rather than just hearing it. The easiest way for Deborah to accept the present is to understand it in the easiest way possible. For her, the lies that were told to her seem easier to understand, so that is how she chooses to accept it. She reveals the information to Hornby and Pauline in the way that she wishes to accept it. For her it is the easy way out, she feels that if she sees the information the way she wants to she doesn't have to accept it in the way that is too difficult for her to understand. When she looks at Hornby and speaks to him, she starts every sentence with "You say", suggesting that they are his opinions and they do not matter. She looks at Pauline then turns back to Hornby, and repeats the lies that Pauline told her. She says these as if these are fact, and it is obvious that this is what she chooses to believe. She summarises what has been said to her in a few lines, making everything sound simple, when in fact it merely scrapes the surface of all the things she has to come to terms with and leaves her with the struggle of what is to come. 1 Rebecca Walklin ...read more.