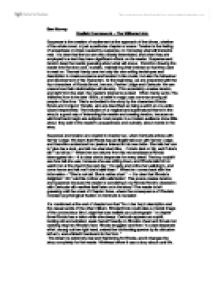 Ben Murray English Coursework - The Withered Arm Suspense is the creation of excitement at the approach of the climax, whether of the whole novel, or just a particular chapter or scene. Tension is the feeling of uneasiness or stress caused by suspense, not knowing what will transpire next. It is clear that the two are very closely interrelated, and when they are employed in a text they have significant effects on the reader. Suspense and tension keep the reader guessing about what will ensue, therefore drawing the reader into the story and, crucially, maintaining their interest so that they want to read on. Thomas Hardy uses not only his own writing techniques and description to create suspense and tension in his novels, but also the behaviour and development of his characters. At the beginning, we are presented with the four characters of Rhoda Brook, her son, Farmer Lodge and Gertrude. We are unsure how their relationships will develop. This uncertainty creates tension, and right from the start, the reader's interest is evoked. When Hardy wrote The Withered Arm in the late 1800's, a belief in magic was common among all people of the time. This is embodied in the story by the characters Rhoda Brook and Conjuror Trendle, who are described as being a witch and a white wizard respectively. ...read more.

This scene is very tense, because Rhoda is left, literally, in suspense as she waits to find out if she has been revealed. The suspense is drawn out right up until the journey home, as Gertrude says nothing when she comes out of Trendle's house - "What did you see?" "Nothing I - care to speak of." In the last sentence of chapter four it is bluntly told that Rhoda left the village. "...her face grew sadder and thinner; and in the spring she and her boy disappeared from the neighbourhood of Holmstoke". This one-line dismissal of a major character completely changes the story. By this point in the story, the reader's suspense is beginning to wane as they would have formed possible outcomes and plot developments to do with Rhoda and her son, and about her becoming a witch, but by having them leave unexpectedly, the reader is forced to create fresh predictions, thus renewing the suspense and tension. The shortness of the exit, and the lack of Hardy's trademark description, adds to the reader's shock, because they were not built up to or prepared for Rhoda's leaving; it is a surprise. As the condition of Gertrude's afflicted arm deteriorates, so too does her marriage. ...read more.

the magic and superstition underpinning the story, compelling the reader to read on, the extensive description that creates tension and a sense of place, as well as the emotions of the characters as they develop; all these things stimulate the reader's interest. The whole story builds to a climax; at the start Rhoda finds out about Farmer Lodge's marriage to Gertrude, then as the characters develop, many things change, and by the end Gertrude is alone and Rhoda and Farmer Lodge are there together, at the climax. The suspense is held right until the end. I believe that the section where Rhoda leaves creates the most tension and increases the suspense. In this example, ironically, it is the lack of Hardy's description that affects the reader - it is uncharacteristic and therefore amplifies the sense of change. It changes the story dramatically, because the reader believes Rhoda to be the main character; the one that we are relating to, and suddenly she is gone, leaving us with little relationship in the story again. We then follow Gertrude until the climax whereupon we are reintroduced to Rhoda. Hardy's way of making us see the plot from both sides is a great way to increase tension, especially when Rhoda disappeared and we did not know what she was doing or feeling. ...read more.