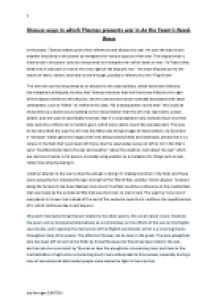 How does Thomas present war in &quot;As the Team's Head Brass&quot;

﻿Discuss ways in which Thomas presents war in As the Team?s Head-Brass In the poem, Thomas makes quite a few references and allusions to war. He uses the nature and weather described in the poems as metaphors for various aspects of the war. The blizzard that is mentioned in the poem could be interpreted as a metaphor for either death or war. ?In France they killed him; it was back in march, the very night of the blizzard, too.? He chose blizzard due to the nature of them, violent, and hard to see through, possibly a reference to the ?Fog of war?. The elm tree can be interpreted as an allusion to the dead soldiers, which have been killed by the metaphorical blizzard, the fact that Thomas mentions that the friend ...read more.

He alliteratively likens the war and weather ?about the weather, next about the war? which are common themes in his poems, normally using weather as a metaphor for things such as war, rather than directly stating it. Another allusion to the war is what the plough is doing; it?s making trenches in the field, and these were everywhere in mainland Europe during the First World War, another trench allusion ?screwed along the furrow till the brass flashed; once more? the flash could be a reference to the muzzle flash that was made by the occasional rifle that was shot over no man?s land. The way the ?once more? was placed in its own line instead of the end of the sentence could be to reinforce the repetitiveness of it, which continues day in and day out. ...read more.

agriculture is becoming much more widespread as time passes, especially during a time of war where all able bodied people were wanted to fight in the trenches. He uses black humour as a coping device ?If I could spare an arm, I shouldn?t want to lose a leg, If I should lose my head, why, so, I should want nothing more? He doesn?t mind if he loses a limb because he still has to endure the pain of it all, but if he loses his head, which can be interpreted as either going insane (this was the first war in which psychological disorders caused by the war were widespread) or literally losing his head, he would not mind because he would not have to suffer the problems of the world any longer. ...read more.