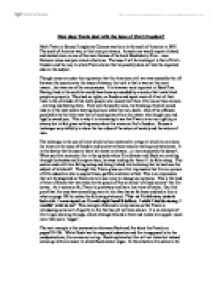 How does Twain deal with the issue of Jim's freedom?

How does Twain deal with the issue of Jim's freedom? Mark Twain or Samuel Langhorne Clemens was born in the south of America in 1835. The south of America was, at this time pro slavery. As such one would expect a biased and slanted view on one of the main themes of the book Huckleberry Finn - race. However close analysis reveals otherwise. The issue I will be looking at is that of Jim's freedom and the way in which Twain shows that he possibly does not take the expected side on the subject. Though many are under the impression that the American civil war was caused by the rift between the country over the issue of slavery, the truth is that is was not the main reason...but was one of the many causes. It is however very important in Huck Finn. Having lived in the south he would have been surrounded by a society that treats black people as property. They had no rights, no freedom and spent most of, if not all their lives in the servitude of rich white people who would treat them little worse than animals - starving and beating them. They were bound by rules, the breaking of which would lead to at the least severe beating and more often that not, death. ...read more.

Twain is almost saying that black people are in humans and not animals and can cope equally well in life. An even more revealing situation occurs after Huck tries to trick Jim into thinking that he's dead. He manages to persuade Jim to believe that he had never left the raft and he had dreamed the whole episode...Jim agrees and makes a theory based on superstition as to what the dream meant. Again, this makes us think Jim is gullible and dim. Huck meanwhile looks quite clever having managed to make up an elaborate lie and trick Jim. It seems to be a repeat of the witchcraft section at the start of the book, but Twain turns this situation on it's head and reverses is. This is a clever trick and shows how Jim as a character is developing. He seems genuinely upset that Huck was dead and when he finds out he was the subject of a trick he is hurt: page 143 " en went to sleep, my heart wuz most broke bekase you wuz los' en I didn'k'yer no mo what become er me en de raf. En when I wake up en fine you back again, all safe en soun' de tears come en I could a got down on my knees en kiss yo' foot I's so thankful. ...read more.

He lies to the men on the skif to protect Jim and in this, shows himself to be free of societies grip. He has a dilemma ; he can protect the friend who trusts him and betray his society or he can do what is seen to be right and turn him in. After he has lied to the men Twain introduces a very important speech that Huck makes to himself. He thinks that what he has done is wrong, when in fact he has done right...this shows that despite having being brought up with their morals, when it comes to it he is more humane than the rest of them and is an outcast from society, which he incidentally is. In conclusion, it appears that Twain never really outrightly states his view on Jim's freedom. In some respects he writes as if Jim shouldn't be free and is a piece of property, but all the time develops him and turns him into the kind of character that is often seen as a hero in literature...his use of irony to constantly confuses the reader as to what is wrong and what is right, and confused the characters even more it is his main tool in dealing with Jim himself and his freedom. From what we have seen so far, Twain remains non committal as to what he thinks but I would say he is leaning towards sympathy for Jim TOM HAGER ...read more.