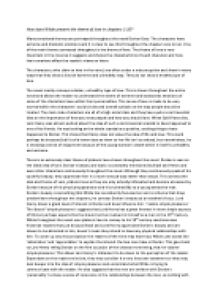 How does Wilde present the theme of love in chapters 1-10 of &quot;Dorian Grey&quot;?

Transfer-Encoding: chunked ﻿How does Wilde present the theme of love in chapters 1-10? Many emotional themes are portrayed throughout the novel Dorian Gery. The characters have extreme and dramatic emotions and it is clear to see this throughout the chapters one to ten. One of the main themes conveyed throughout is the theme of love. The theme of love is very important in the novel as it suggests and shows the characteristics of each character and how their emotions affect the reader?s views on them. The characters, who claim to love in the novel, are often under a misconception and show in many ways that they show a kind of extreme and unhealthy way. They do not show a healthy type of love. The novel mostly conveys a darker, unhealthy type of love. This is shown throughout the entire novel and allows the reader to understand the extent of extreme and backwards emotions of some of the characters have within their personalities. This sense of love is made to be very normal within the characters? social circles and overall outlook on the way people should be treated. ...read more.

Wilde throughout the novel uses platonic love to convey to his 19th century sanctimonious Victorian readers that just because Basil and Lord Henry appreciate Dorian?s beauty and are shown to be attracted to him, doesn?t mean they intend to have any physical relationships with him. To cover up any misconception the readers of the time may have had, Wilde uses words like ?admiration? and ?appreciation? to explain the interest the two men have in Dorian. This goes back to Lord Henry telling Dorian on the first occasion of the characters meeting, that he ?adores? simple pleasures. This allows Lord Henry?s statement to be down to the perception of the reader. Dependant on the readers mind set, they may consider it a very innocent statement or they may look deeper into the idea of simple pleasures and understand what Wilde is trying to communicate with the reader. He also suggests that the men are smitten with Dorian?s ?personality? to show a sense of innocence in the relationships between the men, as nothing with any s****l suggestions would have been acceptable to write about in the time the novel was written. ...read more.

He does not actually meet Sybil before falling in love with her. Wilde here conveys how the artistic themes allow the characters to become quite weak for each other, and the romantic theme of love is portrayed through the Sybil?s work in the theatre. Her perfection within art is so important to Dorian is so significant that it actually ends their relationship when Sybil performs badly to attempt to bring herself and Dorian closer together. He says to Sybil ?you killed my love? suggesting that her performing badly is exactly what has made him so quickly fall out of love with her. Here Wilde presents the way in which love is unhealthy, immature and also how much of an important component love itself is to love and relationships between characters. Although this book seems to convey a lot of Wilde?s own emotions and experiences, he did not meet Lord Alfred Douglas until a year after the novel was published, which means the novel is not necessarily a reflection of Wilde?s own love interests but of his desires within love. ...read more.