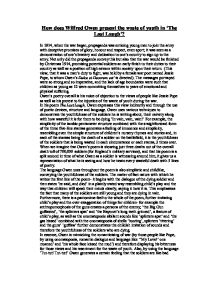 How does Wilfred Owen present the waste of youth in 'The Last Laugh'?

How does Wilfred Owen present the waste of youth in 'The Last Laugh'? In 1914, when the war began, propaganda was enticing young men to join the army with deceptive promises of glory, honour and respect, even sport; it was seen as a demonstration of one's bravery and dedication to one's country to sign up to the army. Not only did the propaganda convey this but also that the war would be finished by Christmas 1914, promising potential soldiers an early finish to their duties to their country as well as a position of high esteem within society upon their return. (This view, that it was a man's duty to fight, was held by a female war poet named Jessie Pope, to whom Owen's Dulce et Decorem est' is directed). The messages portrayed were so strong and so imperative, and the lack of age boundaries were such that children as young as 12 were committing themselves to years of emotional and physical suffering. Owen's poetry overall is his voice of objection to the views of people like Jessie Pope as well as his protest to the injustice of the waste of youth during the war. ...read more.

Furthermore, there is a pantomime feel to the whole of the poem, further imitating child's play and the over-exaggeration of things for children- for example the anthropomorphosis of the guns creates a persona of the enemy; 'the Big Gun guffawed', 'the splinters spat' and 'the Bayonet's long teeth grinned', a feature of child's play, as well as the onomatopoeic sibilant sounds like 'splinters spat' and 'the gas hissed' combined with the onomatopoeia of shells 'hooting', splinters 'tittering' and the guns' 'guffaw' further demonstrates the childish imitation of sounds and therefore the youthfulness of the soldiers who are dying. In essence, Owen is mimicking the romanticising of war (by those people like Pope, by using onomatopoeia, romantic dialogue and language like ''My Love!' one moaned' and 'his whole face kissed the mud') and therefore displaying his bitterness for those views and his resentment for the waste of youth. Also, by using the language 'Tut-tut! Tut-tut!' Owen generates a certain feeling that the soldiers are like bad children- furthermore, the particular use of 'The bullets chirped' is important because it shows, through the childish imitation of the bullets and making them seem like birds, it seems incongruent with ...read more.

In comparison with Owen's other poetry, he seems to be making a much more specific point about the waste of youth in The Last Laugh, Whereas in Disabled, although the bitter resentment of war and the consequences of war are still inherent, Owen more particularly addresses the ruin of youth rather than the waste of youth (the soldier has 'thrown away his knees' and 'lost his colour')- this is also seen in Mental Cases (In which the men's 'minds the Dead have ravished' and who 'rock' in 'purgatorial shadows' in a mental hospital, most probably from Owen's own experiences at Craiglockhart). The waste of youth is also hinted at in Anthem for Doomed Youth in the first line as the soldiers 'die as cattle'. In conclusion, Owen presents the waste of youth in The Last Laugh more specifically than in his other poetry and through the use of poetic devices to create childish imagery, language and poem structure that emphasises this. His tone in the poem is very matter-of-fact, in response to what he so desperately disagrees with in the misleading principles of propaganda and Jessie Pope. Lastly, he mimics this romanticism of war in The Last Laugh and this portrays his bitterness towards the waste of youth. ...read more.