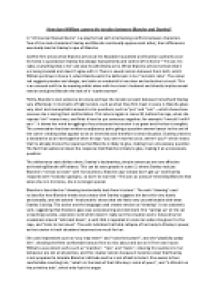 How does William's convey the tension between Blanche and Stanley

﻿How does William convey the tension between Blanche and Stanley? In ?A Streetcar Named Desire? is a play formed with intertwining conflicts between characters. Two of the main characters Stanley and Blanche continually oppose each other; their differences eventually lead to Stanley's r**e of Blanche. Conflict first arises when Blanche arrives at the Kowalski household and Stanley's authority over his home is questioned. Stanley has always had authority and control of his home ? ?his car, his radio, everything that is his? and also his wife Stella as he. When Blanche arrives he feels that h e is being invaded and doesn't agree with it. There is s****l tension between them both, which William portrays in Scene 2, when Blanche exits the bathroom in her ?red satin robe?. The colour red suggests passion and danger, and satin as a material is luxurious and seductive to touch. This is an unusual outfit to be wearing whilst alone with her sister?s husband and directly implies s****l tension and gives Blanche the look of a ?scarlet woman?. ...read more.

Blanche is described as ?drawing involuntarily back from his stare?. The verb ?drawing? used to describe how Blanche breaks eye contact with Stanley suggests she does this very slowly and steadily, and the adverb ?involuntarily? shows that she feels very uncomfortable with what Stanley is doing. This action and the language used creates tension as ?drawing? is not a dynamic verb, suggesting that Stanley?s gaze was overpowering and dominant. She ?springs up? at the cat screeching outside, a dynamic verb which doesn?t really suit the situation and is induced by her uneasiness around ?sink back down?, a verb that is repeated in scene ten when she gives I to the r**e, and ?sinks to her knees?. The verb indicates that total collapse of her body to Stanley?s power, as the tension in both situations becomes too much for her. She uses imperatives such as ?you may enter!? and ?now the button!?, and she ?playfully sprays him?, showing she feels comfortable around him to miss about and act as it if her own house. ...read more.

The first example of this is when Stanley begins to question her about her husband in scene one. In the build up to the r**e, scene 10, a whole range of sounds come together, for example, ?inhuman jungle voices? that turn the house into a hostile place?, ?the barely audible blue piano? which has been present throughout, intensifying actions and emotions. Combined, these noises run alongside the dialogue to provide confusion and increase the pressure. Stanley is one of the main reasons for Blanche taking the final step into true madness, and the amount of tension which builds between them in the different scenes all contribute to the r**e which takes place and effectively ends Blanche?s life. The language choices and dramatic devices used by Williams makes the play appeal much more to the audience?s sense of suspense as well as sympathy, and highlight the tension between Stanley and Blanche which is largely caused by the social and physical differences of Stanley and Blanche, as well as their dependence of Stella, which in itself is another dramatic device to make the play such a success. ...read more.