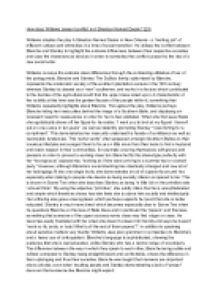 How does Williams present conflict in A Streetcar Named Desire?

Ã¯Â»Â¿How does Williams present conflict in A Streetcar Named Desire? (25) Williams situates the play A Streetcar Named Desire in New Orleans - a â€œmelting potâ€ of different cultures and ethnicities in a time of social transition. He utilises the conflict between Blanche and Stanley to highlight the extreme differences between their respective societies and uses the characters as devices in order to symbolise the conflict caused by the rise of a new social order. Williams conveys the extreme class differences through the contrasting attitudes of two of the protagonists, Blanche and Stanley. The DuBois family, epitomised by Blanche, represents the aristocratic society of the southern plantation owners in the 19th century whereas Stanley is classed as a â€œnewâ€ southerner, and works in a factory which contributed to the demise of the agricultural south that the upper class relied upon. A characteristic of the nobility at this time was the genteel facade of the people within it, something that Williams repeatedly highlights about Blanche. Throughout the play, Williams portrays Blanche hiding her insecurities behind the image of a Southern Belle, and displaying an incessant need for reassurance in order for her to feel validated. ...read more.

By using the adjective â€œprimitiveâ€, she subtly infers that he is unsophisticated and simple which therefore shows how she feels she is above him socially and intellectually. Her artful dig also goes unrecognised, which perhaps supports her point that she is better educated. Stanley is much more direct which becomes especially clear in Scene Two when he questions Blanche on the loss of Belle Reve and in particular the â€œpapersâ€ and finances, something that someone of the upper socioeconomic class may find vulgar or crass. He becomes easily frustrated with her when she doesnâ€™t answer him frankly and says he doesnâ€™t â€œwant no ifs, ands, or buts! Whatâ€™s all the rest of them papers?â€. In addition to speaking about sensitive matters very bluntly, Williams uses poor grammar in comparison to Blancheâ€™s and a heavy use of colloquialism. Blancheâ€™s language is sophisticated, showing the audience that she is well educated, unlike Stanley who has a narrow range of vocabulary. The difference between the way in which they speak to each other, Blanche being subtle and refined compared to Stanley being straightforward and comfortable, shows the difference in their upbringing and thus their societies. ...read more.

In Scene One, the description of Elysian Fields could represent the conflict between the upper and working class. The â€œwhite frame, weathered greyâ€ and â€œfaded white stairsâ€ represents whatâ€™s happening to Blanche and the people with the same colonial background as her; they are slowly losing their supposed virtuousness. The colour â€œwhiteâ€ has connotations of purity and innocence, which perhaps could show how the South was once seen as innocent in terms of slavery, and since its abolition and people are starting to realise how horrific it was, the South is becoming tainted â€œgreyâ€ with guilt. The period of prosperity it once had is starting to fade and their freedom from blame goes with it. The â€œdim white buildingâ€ shows that the purity and whiteness is fading, and it could be symbolising the already fading old American society being engulfed by the sky, thatâ€™s a â€œpeculiar tender blueâ€, representing the new South. This indicates that the old southern American values are being subdued by the new American values. Alternatively, this description of the setting could be foreshadowing Blancheâ€™s mental deterioration. Elysian Fields is a heaven for heroes in Greek mythology, and the stairs are reminiscent of a staircase leading to heaven which develops the idea that this place will lead to Blancheâ€™s demise. ...read more.