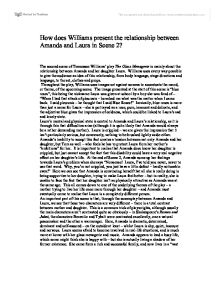 How does Williams present the relationship between Amanda and Laura in Scene 2?

How does Williams present the relationship between Amanda and Laura in Scene 2? The second scene of Tennessee Williams' play The Glass Menagerie is mainly about the relationship between Amanda and her daughter Laura. Williams uses every way possible to give the audience an idea of this relationship, from body language, stage directions and language, to the set, clothes and props. Throughout the play, Williams uses images set against screens to accentuate the mood, or theme, of the upcoming scene. The image presented at the start of this scene is "blue roses", this being the nickname Laura was given at school by a boy she was fond of - "When I had that attack of pleurosis - he asked me what was the matter when I came back. I said pleurosis - he thought that I said Blue Roses!" Ironically, blue roses is more than just a name for Laura - she is portrayed as a rose, pure, innocent and delicate, and the adjective blue gives the impression of coldness, which could be linked to Laura's sad and lonely state. Laura's mental and physical state is central to Amanda and Laura's relationship, as it is through this that difficulties arise (although it is quite likely that Amanda would always be a rather demanding mother). ...read more.

Here, Amanda is dramatic, determined, dominant and self-assured - on the outside at least - whilst Laura is shy, quiet, insecure and nervous. Laura seems afraid to become involved in real-life situations, and is much more at home with her glass menagerie and music. Amanda appears to lead a busy life, which some might think she is happy with - but she is actually living a shadow of her former existence. She came from a rich and successful family, and now lives in a "vast hive-like cellular living unit" as Williams describes her building. She is constantly living in the past and referring to her suitors, tangled up in the biggest mistake - as she sees it - that she ever made, which was to marry Tom and Laura's father. With little left of her former "glory", Amanda is desperate for her daughter to make the right choice this time, to escape the trap she found herself in. This is why she refuses to accept that her daughter has a defect, she sees Laura as her last chance at success. This is perhaps best shown in the passage beginning "So what are we going to do with the rest of our lives?" ...read more.

Other props include Amanda's white handkerchief, which hints of Amanda's upbringing and delicate refinement, and the victriola, which again shows Laura's quiet and nervous side. The clothes are also essential, the coat Amanda is wearing is described as one of the "cheap imitation velvety-looking cloth coats with imitation fur collar" and "her hat is five or six years old" - both descriptions give us the impression of Amanda's former glory now lost, the family are now quite poor - we begin to realise just how far Amanda must have fallen. The set helps a lot, in that Amanda approaches Laura who is sitting down - this gives Amanda more of an imposing demeanour, further accentuating the contrast between mother and daughter. In conclusion, I believe this scene is vital for establishing the relationship between Amanda and Laura. It offers great insight into their lives and situation, and sets the scene for the argument between Tom (who feels he has to defend his sister) and his mother in scene 3. Williams uses all the tools available to him as a playwright to good effect, and the result is that by the end of the scene, we get a very good idea of how the play will end. ...read more.