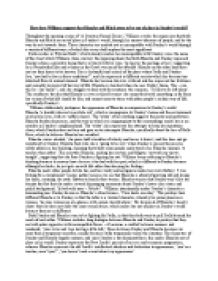 How does Williams suggest that Blanche and Mitch seem to be out of place in Stanleys world?

﻿How does Williams suggest that Blanche and Mitch seem to be out of place in Stanley?s world? Throughout the opening scenes of ?A Streetcar Named Desire?, Williams evokes the impression that both Blanche and Mitch are out of place in Stanley?s world, through his narrow tolerance of people, and by the way he acts towards them. These characters are marked out as incompatible with Stanley?s world through a variety of different ways, of which this essay shall explore the most significant. Stella resides in ?Elysian fields?, which already renders her incompatible with Stanley; since the name of the street which Williams chose conveys the opposing ideals that both Blanche and Stanley represent. Stanley echoes a primitive being that is in touch with his core, ?he heaves the package at her?, suggesting he is Neanderthal like and at home in the Greek version of the afterlife. Blanche on the other hand does not see their house to be heaven. She is disdainful and critical of the place where Stella and Stanley live, ?you had to live in these conditions??, and she represents a different society which has become too detached from its animal element. Blanche has become too over civilised and has repressed her liveliness and sexuality in pursuit of her way of life. Blanche is shocked when she sees Stella?s home, ?this ? can this be ? her home??, and she struggles to deal with the emotions this conjures, ?I?d like to be left alone?. ...read more.

Stanley?s fiery rage is set against Blanche?s misguided playfulness whereby she reads the situation wrongly, which sets the tragedy which soon unfolds, into motion. Stanley is not afraid to speak his mind to Blanche, ?If I didn?t know that you was my wife?s sister I?d get ideas about you?, which shows how Stanley is implying that with Blanche parading around in her red robe, it?s more fitting for a prostitute than a school teacher. This shows how Blanche is incompatible with Stanley. Blanche is pushing for aggravation by answering his questions in a ridiculous way, whereas Stanley already has her figured out, which perhaps Blanche knows but is trying not to acknowledge. Williams? stage directions guide us a reader. They are evocative and precise in their use of imagery, which stand to contrast the language used by most of the characters on stage, except Blanche and Stella. The dialect of most of the characters is uneducated and so the stage directions serve to underline this. They describe the ?coloured shirts, solid blue, a purple, a red and white check, a light green? which are vivid colours ? contrasting and bright. This creates imagery of the diversity and multiculturalism of New Orleans, but it also shows how they are all the same because they are unified by the bright colours and the manliness of them. ...read more.

Williams develops the characterisation of Mitch by portraying him to be somebody who defends women and criticises men. He claims that ?poker should not be allowed in a house with women?, and since he could have said that women shouldn?t be in a house when poker is being played, it emphasises the idea that he has respect for women, unlike Stanley. Mitch is called many times when speaking to Blanche, ?Mitch!?, but he tells them to ?deal me out. I?m talking to Miss?. This suggests that he will take any opportunity to get away from the men who are overpowering and have different ideals to him, and he sees Blanche as a distraction from having to go back. Stanley seems to be jealous of Mitch?s interest in Blanche, and calls him back to the poker game repeatedly whilst ?looking through them drapes?. This marks Mitch as being out of place with the world in which Stanley lives because he has totally different values when it comes to women, and unlike Stanley, he is sensitive and kind. To conclude, there are many ways in which Williams gives the impression that Blanche and Mitch are out of place in Stanley?s world, namely the use of stage directions. They guide us and paint a picture of the scene unravelling, and give some insight into how the play would have been performed on stage. As a reader, being able to visualise the scene really emphasises how unwelcome Blanche and Mitch are, in Stanley?s eyes. ...read more.