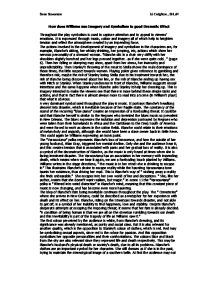 How does Williams use Imagery and Symbolism to good Dramatic Effect

How does Williams use Imagery and Symbolism to good Dramatic Effect Throughout the play symbolism is used to capture attention and to appeal to viewers' emotions. It is expressed through music, colour and imagery all of which help to heighten tension and reflect the atmosphere created by an impending force. The actions involved in the development of imagery and symbolism in the characters are, for example, Blanche's sitting, her whisky drinking, her jumping, etc, actions which show her nervous personality of a stressed woman. "Blanche sits in a chair very stiffly with her shoulders slightly hunched and her legs pressed together...as if she were quite cold..." (page 6). Then her falling or slumping may show, apart from her stress, her insecurity and unpredictability. Then Stanley's throwing of the meat to Stella shows the male dominance of those times, the little respect towards women. Playing poker gives reference to gambling and therefore risk, maybe the risk of Stanley losing Stella due to his treatment towards her, the risk of Blanche being discovered about her lies, or the risk of Blanche ending up having s*x with Mitch or Stanley. ...read more.

Despite Blanche's desperate attempts at escaping the imposing threat, it seems that her fate is already decided. "A condition of being human is that we are all on the streetcar rumbling towards our death and this inevitability is part of the tragedy of life as Williams saw it." The first colour perceived by the audience is white, from Blanche's dressing, and its significance was already mentioned, as purity and social class. But it is also relevant for another quality, which is the opposition to Stanley's colour of clothes, which is red. Red may be symbolising s****l aspects, since red is the colour for passion. And this opposition symbolises her opposite personalities and their confrontations. The colours blue and black from the sky are also relevant since they represent life and death respectively. This may be Blanche's husband's physical death or society's death, due to all its problems. Blanche's clothes are an important symbol for her character. She still dresses as if she is in the past, trying to maintain the stereotypical image of a southern belle. At first the audience may not immediately grasp the importance of Blanche's clothes, but as the play continues Stanley is introduced and becomes a stark contrast to her. ...read more.

He is "a richly feathered male bird among hens." As the scene progresses the domination and destruction increases. Blanche becomes weaker and Stanley becomes more powerful, and in control. Stanley is a primate at the peak of his physical manhood and this is symbolised in the music associated with him. The honky-tonk music with its offensive beats triumph over the harmonic and rhythmic melodies of Blanche. The music in this scene and throughout the play is highly metaphorical as it illustrates the dominant Stanley who eventually succeeds in his conquest over the more submissive Blanche. The distorted shapes on the walls and the jungle cries, symbolise human cruelty while the menacing lurid shadows and reflections increase as Blanche becomes more panicked. It is evidence of her hysteria and insanity and an indication of the effect that the terrors of the night Allan died are still with her. Stanley is the human symbol for the relentless fate that gradually breaks her down. William's uses imagery and symbolism to great dramatic effect throughout the whole play, in dialogue and largely in stage directions, this gives the play a complex story, and when many hidden symbols and metaphors are discovered, opens many new aspects of the story. Ewan Stevenson L6 Creighton , SHLeM ...read more.