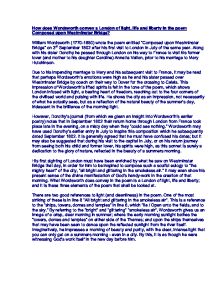 How does Wordsworth convey a London of light, life and liberty in the poem Composed upon Westminster Bridge?

How does Wordsworth convey a London of light, life and liberty in the poem Composed upon Westminster Bridge? William Wordsworth (1770-1850) wrote the poem entitled "Composed upon Westminster Bridge" on 3rd September 1802 after his first visit to London in July of the same year. Along with his sister Dorothy he passed through London on his way to France to visit his former lover (and mother to his daughter Caroline) Annette Vallon, prior to his marriage to Mary Hutchinson. Due to his impending marriage to Mary and his subsequent visit to France, it may be read that perhaps Wordsworth's emotions were high as he and his sister passed over Westminster Bridge by coach on their way to Dover for the crossing to Calais. This impression of Wordsworth's lifted spirits is felt in the tone of the poem, which shows London infused with light, a beating heart of freedom, reaching out to the four corners of the civilised world and pulsing with life. He shows the city as an impression, not necessarily of what he actually sees, but as a reflection of the natural beauty of the summer's day, iridescent in the brilliance of the morning light. ...read more.

It may be felt that this line gives an impression where all Wordsworth sees and mentions in the poem seems alive, has a "mighty heart" that beats to its own rhythm of life. One other personification Wordsworth uses, be it not as great as the other examples given, is in line 13 "Dear God! The very houses seem asleep." The reference to the houses sleeping is an impression of the actual bricks and mortar appearing to be asleep on this morning- just as its inhabitants may well have been. Other ways the poem conveys life is through the lines "Open unto the fields, and to the sky", and "valley, rock or hill", a clear reference to nature. Wordsworth uses a number of similar references to the natural world in this poem, notably: river, sun, fields, sky, valley, rock, hill and Earth. Through these, the reader has a sense of the natural within Wordsworth's vision of London: an impression of life. By Wordsworth referring to the "Ships, towers, domes and temples" (in line 6) being "Open unto the fields, and to the sky" (in line 7), he is giving an idea that the buildings and man made structures of the city, as ...read more.

Wordsworth also uses long sounding vowel sounds, such as the /i:/ of sleep, deep and majesty; the /i:/ and /u:/ of be auty and be autiful; the /e / of air and fair and the / / of clear. He also uses /aI/ in glideth. It is through the use of assonance of these long vowel sounds that Wordsworth also portrays, light, life and, most of all, liberty in his poem. The assonance draws the reader onward and gives a quiet, calm, gentle and flowing sound to the overall composition. Wordsworths poem "Composed Upon Westminster Bridge" praises the coexistence between nature and civilization, and conveys dramatically, and sometimes subtly, to the reader a London of light, life and liberty. He does this through a number of means: imagery of words or phrases; use of assonance and soft phoneme sounds; enjambment, by allowing the poem to flow freely; personification of the sun, river and city itself; the sound and the rhythm of the poem; alliteration and the use of sibilance to encourage the rhythm and sound of the poem to freely flow. By these means, Composed Upon Westminster Bridge clearly conveys a London imbued with light, life and liberty. Tony Goring 14 October 2008 Word count 2001 ...read more.