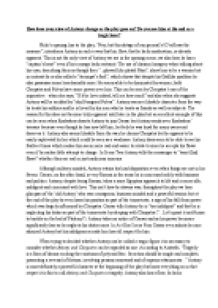 How does your view of Antony change as the play goes on? Do you see him at the end as a tragic hero?

﻿How does your view of Antony change as the play goes on? Do you see him at the end as a tragic hero? Philo?s opening line to the play, ?Nay, but this dotage of our general?s/ O?erflows the measure?, introduces Antony in such a way that his, flaw, that he lacks moderation, is already apparent. This is not the only view of Antony we see in the opening scene, we also hear he has a ?captain?s heart? even if his courage lacks restraint. The use of classical imagery when talking about his eyes, describing them as though they ?...glowed like plated Mars?, show him to be a warrior but in contrast he is also called a ?strumpet?s fool?, which shows that despite his Godlike qualities he also possesses some less desirable ones. He seems able to be dominated by women; both Cleopatra and Fulvia have some power over him. This can be seen by Cleopatra?s use of the imperative when she says, ?If it be love indeed, tell me how much? and also when she suggests Antony will be scolded by ?shrill-tongued Fulvia?. ...read more.

Caesar tells Antony he is ?too indulgent? and that he is neglecting his duties as part of the triumvirate by sleeping with Cleopatra (?...Let?s grant it not/Amiss to tumble on the bed of Ptolemy?). Antony takes no notice of Caesar and so his power becomes significantly less as he neglects his duties more. In Act One Scene Four Caesar even admits he once admired Antony but his indulgences made him lose all respect for him. When trying to decided whether Antony can be called a tragic figure it is necessary to consider whether Antony and Cleopatra can be regarded as one. According to Aristotle, "Tragedy is a form of drama exciting the emotions of pity and fear. Its action should be single and complete, presenting a reversal of fortune, involving persons renowned and of superior attainments...? Antony is most definitely a powerful character at the beginning of the play but loses everything so in that respect it is fair to call Antony and Cleopatra a tragedy. ...read more.

The play allows us to decide whether Aristotle?s definition is the only correct one or if it is possible that a character which generates strong emotions in members of the audience and leaves an impression even after watching can be deemed a tragic figure even if as well as pity we actually feel the character has succeeded in some ways. Antony?s downfall is not complete because at the end of the play we actually feel pleased that he and Cleopatra are together again, despite that it is in death. Overall I believe Antony?s change in character throughout the play is minimal but his change from the military and Roman man he was to the man we see throughout the play is very significant and although this change could be said to be partially accountable for his fall, I also feel it makes him the likeable and memorable character we empathise with. We feel no regret for his death which raises the question of whether it really can be deemed a tragedy but I feel it is a tragedy of forms in that Antony and Cleopatra had to die in order to stay together. ...read more.