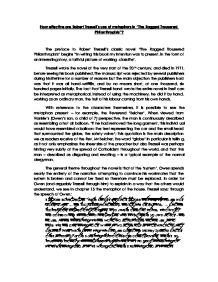 How effective are Robert Tressells use of metaphors in The Ragged Trousered Philanthropists?

How effective are Robert Tressell's use of metaphors in "The Ragged Trousered Philanthropists"? The preface to Robert Tressell's classic novel "The Ragged Trousered Philanthropists" begins "In writing this book my intention was to present, in the form of an interesting story, a faithful picture of working-class life". Tressell wrote the novel at the very start of the 20th century, and died in 1911, before seeing his book published. The manuscript was rejected by several publishers during his lifetime for a number of reasons but the main objection the publishers had was that it was all hand-written, and by no means short, at one thousand, six hundred pages initially. The fact that Tressell hand wrote the entire novel in itself can be interpreted as metaphorical. ...read more.

Mr Belcher, the word "globe" in particular is telling, as it not only emphasizes the sheer size of the preacher but also Tressell was perhaps hinting very subtly at the spread of Catholicism throughout the world, and that this man - described as disgusting and revolting - is a typical example of the normal clergyman. The general theme throughout the novel is that of the 'system'. Owen spends nearly the entirety of the narration attempting to convince his workmates that the system is broken and cannot be fixed so therefore must be replaced. In order for Owen (and arguably Tressell through him) to explain in a way that the others would understand, we see in chapter 15 the metaphor of the house. ...read more.

Well, we're all living in a house called the Money System; and as a result most of us are suffering from a disease called poverty. There's so much the matter with the present system that it's no good tinkering at it. Everything about it is wrong and there's nothing about it that's right. There's only one thing to be done with it and that is to smash it up and have a different system altogether. We must get out of it.'" This metaphor is fairly obvious - but the use of it alone is important as it is extremely effective and simple to understand. In the novel Tressell is attempting to explain to the reader (through the narrative) Socialism, the cause of poverty and the solution. In this extract Tressell uses the house to represent the system and the 'illness' is poverty. ...read more.