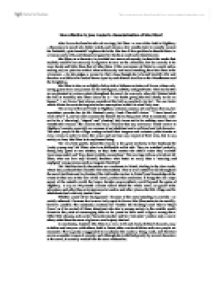 How effective is Jane Austen's characterization of Mrs Elton?

How effective is Jane Austen's characterization of Mrs Elton? After Emma declines his offer of marriage, Mr Elton - a man of the cloth in Highbury - disappears in search of a better match, and returns a few months later to proudly present his 'beautiful, quite beautiful' nightmarish bride. She has all the qualities he should desire in a woman and a wife, and chooses to ignore her faults as much as he does his own. Mrs Elton, as a character, is provided as a source of comedy, to shock the reader that anybody could be so extremely arrogant as to near on the ridiculous, but her comedy is far more harsh and bitter than that of Miss Bates. If the macrocosm of Emma is a social satire, seeking only to poke fun at their ideas of hierarchy and social standing, then Mrs Elton is the microcosm - for she judges a person by their class, ...read more.

each occasion she doesn't fail to disappoint: what is constantly made out to be a 'charming', 'elegant' and 'pleasing' lady turns out to be nothing more than an 'insufferable woman'. She receives the warm welcome that any newcomer would receive in Highbury's society, especially as a spouse of an inhabitant and a well-bred and rich character. The other people of the village manage to hold their tongues and maintain polite facades at every event, in order to keep the peace and not lose any respect of their own, but in any society or class, Mrs Elton is an unpleasant being. The very best quality about this woman is her great similarity to her husband, the 'pretty young man' Mr Elton, who is as dislikeable as his wife. They are matched perfectly, seeing only good in one another, as they both contain the other's traits: they are both 'enormous snobs' and 'bray about wealthy connections.' ...read more.

Whether proud of her background - because of the social standing it provides - or mutely ashamed - because she is never truly equal to Emma, Mrs Elton seeks to rise socially, however possible. She constantly mentions her 'brother Mr Suckling's seat' that is 'Maple Grove' as if to remind all those about just who she is among society in the outside world, almost to the point of encouraging them to be proud to have such a figure among them. Other little phrases, such as her 'barouche-landau' and her 'cara sposo' produce only a comic effect, rather than the sense of glamour and majesty desired. In conclusion, Austen's Mrs Elton is a very vivid and clearly-defined character, easy to define and compare with others, both in Emma, other works of fiction and even people we encounter. She is greatly exaggerated to emphasise the mockery being made, and therefore serves as another means of comedy, and although she is disliked greatly by several characters in the novel, it certainly wouldn't be the same without her. ...read more.