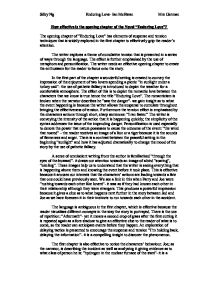 How effective is the opening chapter of the Novel &quot;Enduring Love&quot;?

How effective is the opening chapter of the Novel "Enduring Love"? The opening chapter of "Enduring Love" has elements of suspense and tension techniques that is widely explored in the first chapter to effectively grip the reader's attention. The writer explores a theme of cumulative tension that is presented in a series of ways through the language. The effect is further emphasised by the use of metaphors and personification. The writer needs an effective opening chapter to create the enthusiasm for the reader to focus onto the story. In the first part of the chapter a wonderful setting is created to convey the impression of the enjoyment of two lovers spending a picnic "in sunlight under a turkey oak"- the use of pathetic fallacy is introduced to depict the weather for a comfortable atmosphere. The effect of this is to depict the romantic love between the characters that we know is true hence the title "Enduring Love". The romanticism is broken when the narrator describes he "saw the danger"- we gain insight as to what the event happening is because the writer allows the suspense to cumulate throughout bringing the effectiveness of tension. Furthermore the tension effect is emphasised by the characters actions through short, sharp sentences: "I ran faster." The writer is conveying the intensity of the action that it is happening quickly; the simplicity of the syntax addresses the issue of the impending danger. ...read more.

We feel a sense of innocence when the writer mentions "a boy" in the balloon basket. The boy is vulnerable and terrified as if he was unable to react the situation; how the boy was "tossed" in the balloon signifies the tension and trauma that the boy went through. There are also uses of similes to denote the threat that people posed when they spoke to him "our words were like stones"- it is a perception of his danger. The writer wants us to feel the boy is suffering from the people that want to help him because of their altruism. Different types of love are conveyed in the opening chapter; the writer intends to signify the enduring love between Clarissa and Joe, after their "reunion after a separation of six weeks". It clarifies their relationship that they are meant to be together which is effective to introduce a true bonding as lovers. There is also an element of paternal love between James Gadd and his grandson Harry who was in the balloon. Although John Logan was not the father of Harry inside the balloon basket (as one might expect paternal love as father and son), the writer wants us to believe that Logan volunteered to help the boy and had paid the price of his life. This is effective because it informs the reader to think more deeply of altruism and to think of others before yourself to symbolise selflessness. ...read more.

The writer draws our attention to the inevitability of nature and its powers: "The wind renewed its rage", the effect is that the characters have no opposition against it- on the other hand John Logan who was the most responsible to stop the balloon paid his life for it. This affects the other characters who were involved to question themselves who helped him to his death. Perhaps the reader feels a sense of arrogance to every character's involvement as Joe was "not prepared to accept" it was him. Furthermore Joe questions himself: "a reasonable course?" to rationalise his thoughts of his moral rights. An argument shall break out which stimulates the mind of the reader as to whom was right: "Someone said me"- the reader is affected by the characters' actions and is curious to find out the consequences in the next chapters. The use of a short sentence in the end is once again used to cumulate the tension: "Only ruthless gravity." Yet it associates the inevitable force of nature, in this case "gravity" as a cause of Logan's death, but on the contrasting side brought the boy safely to earth. Throughout the first chapter, elements of tension and suspense are used to captivate the reader to read the book. Not only has it presented the ballooning accident in an interesting and tense action, but the characters are also being introduced as well as background information of Joe and Clarissa. A vividly expressed narration from Joe as the main character to evoke a page turner. Silky Ng Enduring Love- Ian McEwan Mrs German ...read more.