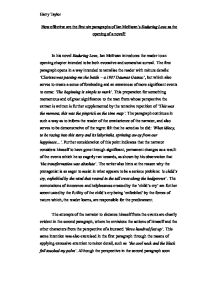 How effective is the opening of ''Enduring Love'' as an introduction to the novel?

How effective are the first six paragraphs of Ian McEwan's Enduring Love as the opening of a novel? In his novel Enduring Love, Ian McEwan introduces the reader to an opening chapter intended to be both evocative and somewhat surreal. The first paragraph opens in a way intended to tantalise the reader with minute details: 'Clarissa was passing me the bottle - a 1987 Daumas Gassac', but which also serves to create a sense of foreboding and an awareness of more significant events to come: 'The beginning is simple to mark'. This preparation for something momentous and of great significance to the man from whose perspective the extract is written is further supplemented by the tentative repetition of 'This was the moment, this was the pinprick on the time map'. The paragraph continues in such a way as to inform the reader of the omniscience of the narrator, and also serves to be demonstrative of the regret felt that he acted as he did: 'What idiocy, to be racing into this story and its labyrinths, sprinting away from our happiness...'. ...read more.

know now', 'innocent of the grief this entanglement would bring', and, perhaps most blatantly, 'the encounter that would unhinge us was minutes away'. The writer also avoids specifically stating what this monumentous incident is, describing it only as a 'colossus' which 'set fabulous magnitude against the puny human distress at its base'. In doing so, McEwan succeeds in portraying what is evidently a physically dominating presence as something which holds significance not only as a result of enormous tangible dimensions, but also as a psychologically intimidating manifestation of something which dwarfs the significance of the 'puny human distress'. The third paragraph begins by demonstrating another technique evidently being utilised by the narrator to distance himself from the 'grief this entanglement would bring'. The divulging of relevant and vital information seems to be deliberately delayed here, replaced by information regarding the way in which Clarissa reached the 'centre of the field'. The confused thoughts of the narrator at this time are evident in the way in which the writer provides longer sentences with convoluted structure and syntax: 'the aftermath, the second crop, the growth promoted by that first cut in May'. ...read more.

This metaphor is continued in the final, short paragraph, emphasising the terrible and irreversible effect that the balloon would have on each of the characters involved: 'we were running towards a catastrophe, which itself was a kind of furnace in whose heat identities and fates would buckle into new shapes.' The paragraphs gradually shorten in the extract, perhaps mirroring the narrator's own train of thought and his attempts to concisely express his concerns and description of events. The significance of this final paragraph's brevity lies in the fact that the narrator has finally managed to describe what is taking place - that a child was in the basket of the balloon with a man 'in need of help' clinging onto the rope which anchors the balloon to the ground. The tensile energy of the balloon and the inevitability of its departure are perhaps a metaphor in itself for the barely restrained despair maintained by the narrator throughout the opening of the novel - the fact that something cataclysmic has been set in motion that cannot be stopped. ?? ?? ?? ?? Harry Taylor ...read more.