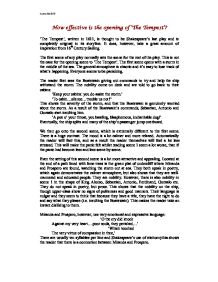 How effective is the opening of 'The Tempest'?

How effective is the opening of 'The Tempest'? 'The Tempest', written in 1611, is thought to be Shakespeare's last play and is completely original in its storyline. It does, however, take a great amount of inspiration from 16th Century Sailing. The first scene of any play normally sets the scene for the rest of the play. This is not the case for the opening scene to 'The Tempest'. The first scene opens with a storm in the middle of the sea. The general atmosphere is chaotic and it's easy to lose track of what's happening. Everyone seems to be panicking. The reader first sees the Boatswain giving out commands to try and help the ship withstand the storm. The nobility come on deck and are told to go back to their cabins: 'Keep your cabins: you do assist the storm.' 'To cabin...silence...trouble us not!" This shows the severity of the storm, and that the Boatswain is genuinely worried about the storm. ...read more.

poor souls, they perished...' 'Which touched The very virtue of compassion in thee,' There are usually ten syllables per line and Shakespeare's use of stichomythia shows the reader that there is a connection between Miranda and Prospero. Prospero tries to reassure Miranda that no one has been harmed, but she seems to be inconsolable. This intrigues the reader and makes them wonder if Prospero is being truthful when saying there is no harm done, and if he is how no harm can be done from a shipwreck and a storm. This draws in the reader, and makes them want to read further. Prospero decides to tell Miranda the story of why he has started this storm. ''Tis time I should inform thee farther.' Then Prospero tells Miranda of how he used to be the Duke of Milan, and how he was kicked out of the city. He describes the events leading up to it, and his innocence in the whole ordeal, but Miranda is barely listening. ...read more.

Ariel tells Prospero all the people who were on board the ship are dotted around the island, with Ferdinand, the King's son, being by himself. The ship is safe in harbour, and all the mariners are asleep on board. This introduction to 'The Tempest' does exactly what it aims to do. Scene 1, thought not a typical start to a play, is very effective and portrays the sense of panic and disruption well. We see the fear in the ship's crew, and are surprised when we learn that the storm was not real. They way the people on the ship reacted shows the reader that they never had a doubt in their mind that it was a real storm. We are given an effective intuition of what each character is like, for example, that Prospero is not an evil character and was genuinely worried that one of the ship's passengers was harmed. Furthermore, we are given a general idea of the story beforehand and how the current situation has arrived, which prevents confusion and allows the reader to interpret the story more. Laura Hatfield ...read more.