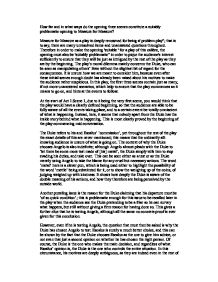 How far and in what ways do the opening three scenes constitute a suitably problematic opening to Measure for Measure?

How far and in what ways do the opening three scenes constitute a suitably problematic opening to Measure for Measure? Measure for Measure as a play is deeply renowned for being a' problem play"; that is to say, there are many unresolved items and unanswered questions throughout. Therefore in order to make the opening 'suitable ' for a play of this calibre, the opening must also be 'suitably problematic" in order to pique the audience's interest sufficiently to ensure that they will be just as intrigued by the rest of the play as they are by the beginning. The play's moral dilemma mainly concerns the Duke, who can be seen as manipulating others' lives without the slightest bit of regard for the consequences. It is unsure how we are meant to consider him, because even after these initial scenes enough doubt has already been raised about his motives to make the audience rather suspicious. In this play, the first three scenes contain just as many, if not more unanswered scenarios, which help to ensure that the play commences as it means to go on, and hints at the events to follow. At the start of Act 1 Scene 1, due to it being the very first scene, you would think that the play would have a clearly defined beginning, so that the audience are able to be fully aware of all the events taking place, and to a certain extent be totally omniscient of what is happening. ...read more.

Of course, the Duke is the one who makes the main decision, and regardless of what Escalus' opinion is, the Duke is the one who controls the entire situation. In this circumstance, his motives are deeply ambiguous, as they are indeed even in the rest of the play. It is confusing why he chooses to disguise himself as a friar, since at the time of the play being performed, Catholics were not usually trusted at all, let alone with the inner workings of someone's life. However here Catholicism is referred to throughout; whether it is because Isabella is a Catholic nun of one of the strictest orders, or because of marriage (which is another suitably problematic issue on its own), nonetheless it is a key fragment of the play's content. In Scene 2, we come across for the first time some of the examples which prove the existence of Vienna's underworld. Lucio, Pompey and the other Gentlemen are prime examples of this; however it is truly unclear as to what the audience are meant to think of them. By all means, they do use such coarse expressions as would be expected to be heard from the worst characters, such as "French crown" referring of course to syphilis. By the mentions of sexual diseases, the audience therefore presume them to be the negative characters of the play; however it is unclear as to whether all morally ambiguous behaviour should also be condemned. ...read more.

This is rather problematic because the audience is more used to the characters' motives being clear-cut and easy to understand, unlike Isabella's complex multi-layered personality. This is a problem play, but it can be seen that the characters being unable to be understood in one step too far from just the events of the play being problematic. Measure for Measure is a Shakespearian problem play, which sharply addresses some of the issues of the law of the day when it came to the balance between justice and mercy, or the attitudes towards non-witnessed marriage. However this play takes it one step further than there simply being difficulties to overcome; most of the play's background is in fact completely unknown. Whole conversations, except for their conclusions, are omitted, characters are not clearly described, reasons for peoples' actions are unknown, and even motives are unclear. However when these three scenes are put in context with the rest of the play, it goes from being overly problematic to in fact just suitably so. The issues raised here are not created just to confuse the audience, but to provoke a well thought out mental response from them, prompted by the characters' opinions. These problems are referred to constantly throughout the play, and help to give it the conclusion that it has; not completely resolved of course, but as much as could be expected from such a problematical play. ...read more.