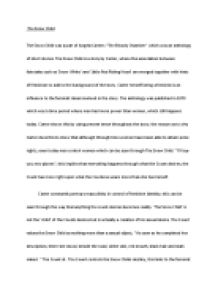 How far can you apply a feminist reading to Angela Carter's &quot;The Snow Child&quot;?

﻿The Snow Child The Snow Child was a part of Angela Carters ??The b****y Chamber?? which was an anthology of short stories. The Snow Child is a story by Carter, where the association between fairytales such as 'Snow White? and 'Little Red Riding Hood' are merged together with hints of feminism to add to the background of the story. Carter herself being a feminist is an influence to the feminist ideas involved in the story. The anthology was published in 1979 which was a time period where men had more power than women, which still happens today. Carter shows this by using present tense throughout the story, the reason as to why Carter does this to show that although through time women have been able to attain some rights, even today men control women which can be seen through The Snow Child. ??I?ll buy you new gloves??, this implies that everything happens through what the Count desires, the Count has more right upon what the Countess wears more than she has herself. Carter constantly portrays masculinity in control of feminine identity; this can be seen through the way that anything the count desires becomes reality. ?The Snow Child? is not the ?child? of the Counts desires but is actually a creation of his s****l desire. The Count values the Snow Child as nothing more than a s****l object, ??As soon as he completed her description, there she stood, ...read more.

scarlet heels, and spurs??, this is again the same as the Snow Child as the features of the her were what the Count desires, ??....As soon as he completed her description, there she stood??. This can also show that although women are not at fault because of their striking features, through the eyes of many people especially men, they will be interpreted as evil and will be punished. Throughout the last verse, both the character of the Countess and the Snow Child are punished through the ?rose?, although another interpretation of this could be that the rose is a symbol of femininity or the v****a, so the "bite" symbolizes the suffering that go with being a female. Beauty and pain both come together when it comes to being a female. However, in a feminine view men are viewed as satisfying their needs through a woman and even though it is the Count that gives the pain to the Countess and the Snow Child, he himself doesn?t suffer. This also backs up the feminist view that men use women for pleasure only. The roles of the character of the Countess and the Snow Girl are to an extent stereotyped, however because the story has been written by a feminist, certain aspects of it clearly show how women are stereotyped purposely, which Carter contradicts in a very clever way. ...read more.

This shows the Countess as strong as throughout the story she never gives up from trying to save her marriage. On the other hand she can also be seen as weak as even though she tries her best to get rid of the Snow Child she is unable to. On the other hand the character of the Snow Child cannot necessarily be seen as strong. This is because is a figment of the Counts imagination. Also another reason as to why the character is seen as weak is because she is unable to satisfy the Counts idea of feminine perfection, although she has beauty she is unable to stay loyal to him as she is not there forever. In conclusion the narrative can be seen as revealing how the heroine of fairy tales are the vision of patriarchal thinking, based on the want for damage and s*x causing downfall; and how women are visualized as having to endure and struggle for the indecisive attention of men. ?The Snow Child? how women are stereotyped as s****l objects and Carter is clearly able to show how women suffer even when they are not at fault. This can be seen at the end as the Count causes the pain for both the Countess and the Snow Child however he himself is not punished for causing what he did. Word Count (Without Title) ? 1,331 ...read more.