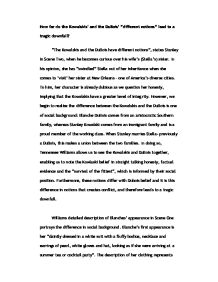 How far do the Kowalskis and the DuBois different notions lead to a tragic downfall?

How far do the Kowalskis' and the DuBois' "different notions" lead to a tragic downfall? "The Kowalskis and the DuBois have different notions", states Stanley in Scene Two, when he becomes curious over his wife's (Stella's) sister. In his opinion, she has "swindled" Stella out of her inheritance when she comes to 'visit' her sister at New Orleans - one of America's diverse cities. To him, her character is already dubious as we question her honesty, implying that the Kowalskis have a greater level of integrity. However, we begin to realise the difference between the Kowalskis and the DuBois is one of social background: Blanche DuBois comes from an aristocratic Southern family, whereas Stanley Kowalski comes from an immigrant family and is a proud member of the working class. When Stanley marries Stella- previously a DuBois, this makes a union between the two families. In doing so, Tennessee Williams allows us to see the Kowalskis and DuBois together, enabling us to note the Kowlaski belief in straight talking honesty, factual evidence and the "survival of the fittest", which is informed by their social position. Furthermore, these notions differ with Dubois belief and it is this difference in notions that creates conflict, and therefore leads to a tragic downfall. Williams detailed description of Blanches' appearance in Scene One portrays the difference in social background. ...read more.

Stanley's response leads Blanche to be more defiant. Blanche then moves into the bedroom with Stella, where she creates her "world" represented by her "pink silk brassiere", stressing her world of gentility and contrasts with the bold, primary colours in the kitchen. Furthermore "STELLA has removed her dress and put on a light blue satin kimono", this shows Stella's shift to pastel colours and therefore representing her as part of Blanches world. This develops into a battle over space and Williams uses the stage directions to communicate this division. This creates conflict because Stanley is unable to accept Blanches' beliefs, but it is also threatening to his relationship with Stella because he is unable to be part of Blanches' world. Therefore, when "Rhumba Music comes over the radio" in the bedroom, which portrays Blanches refinement and gentility, he "jumps up and, crossing to the radio, turns it off."; this shows a rise in conflict between their different notions. This use of visual and sounds effects, like the use of Rhumba music in this scene are in line with New Plastic Theatre - Williams's intention to bring us 'close' to the truth by using symbols and creating an atmosphere that would increase the impact of action. These techniques remind us of the Cinema art form, Williams was clearly influenced by Cinema, as he did grow up in the 20's and 30's - the golden age of Hollywood cinema, also previously being a film critic for his High School magazine. ...read more.

Stanley is powerful and represents a new heterogeneous America, a social leveller, unlike aristocratic upper class Dubois who show decline and are associated with the Old South. Unlike Stanley, Blanche has none of the practical skill to survive. For example in Scene Four she is unable to use a phone and instead of trying, she hides from reality asserting: 'I don't want realism', instead she wants her fantasy world and this leads to her delusion; she believes the lies that she tells to Stanley, which makes Stanley despise her as much as he does. It is this too, which makes her use sexuality to survive, which she explains in Scene Five: "Have to be seductive - put on soft colours, the colours of butterfly wings, and glow - make a little - temporary magic just in order to pay for - one night's shelter" Here, Stanley objects to this and he uses this to bring Blanche to her tragic end in the r**e scene. Williams therefore shows how Blanche's notions are non-existent and can therefore no longer survive compared to Stanley's notions in evidence and truth, which enable him to survive in society without the gentility and refinement which Blanche presented, Williams therefore shows how the decadence of these notions must end tragically because Blanche has to accept the end to her notions and also be able to survive in a straight-forward, practical society. ?? ?? ?? ?? ...read more.