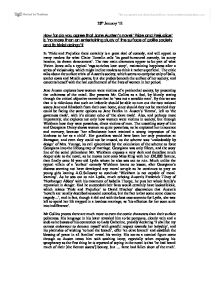 How far do you agree that Jane Austens novel Pride and Prejudice is no more than an entertaining study of the surface of polite society and its trivial doings?

How far do you agree that Jane Austen's novel 'Pride and Prejudice' is 'no more than an entertaining study of the surface of polite society and its trivial doings'? In 'Pride and Prejudice there certainly is a great deal of comedy, and will appeal to many readers for what Claire Tomalin calls 'its good-humoured comedy, its sunny heroine, its dream denouement'. The two main characters appear to be part of what Vivien Jones calls a typical 'rags-to-riches love story', maintaining happiness after a series of vicissitudes, which might incline readers to think it rather superficial. The critic talks about the surface trivia of Austen's society, which seems to comprise only of b***s, scarlet coats and Muslin gowns, but she probes beneath the surface of her society, and concerns herself with the real confinement of the lives of women in her period. Jane Austen explores how women were victims of a patriarchal society, by presenting the unfairness of the entail. She presents Mr. Collins as a fool, by bluntly stating through the critical objective narrative that he 'was not a sensible man'. By this we see that it is ridiculous that such an imbecile should be able to turn out the two rational sisters Jane and Elizabeth ...read more.

fame had fallen short of the truth'. Austen tells us 'this gallantry was not much to the taste of some of his readers', highlighting his obsequiency with the objective narrative. However, his proposal to Elizabeth reveals something much crueler and darker beneath this facade. He knows of the importance of money 'in a narrow, desperate, feminine world of financial constraint' (Robert Polhemous), he and plays on this by explaining that he would not ask for any money from Mr Bennet, reminding her 'I am well aware that it could not be complied with'. In the same way Charlotte finds herself in a position of little choice, and because of her little fortune she finds herself forced to marry the fool, as 'it was the only honourable provision for well-educated young women of small fortune'. Jane Austen points out the cruelty of this situation with a scathing tone of criticism of her society, using abstract evaluative language to emphasise her point that 'however uncertain of giving happiness, [marriage] must be their pleasantest preservative from want'. Once more Collins ceases an opportunity to exploit financial dependency, and Robert Polhemus states that 'Charlotte's cast must concern anyone who thinks seriously about the history of women', summarising her situation as 'a kind of socially respectable prostitution'. ...read more.

Collins, whom believed she did 'secretly mean to accept', Mr Darcy, who we are told 'had no doubt of a favourable answer'. Elizabeth insists in both cases this because of a lack of 'desire', proving her search for a husband also one for rational happiness, an idea which Austen presents as the only way for Claire Tomalin's 'dream denouement'. To gain happiness he also demonstrated a eveloement throughout the novel, as he was educated from pride and prejudice to his own rational happiness. This is demonstrated as he goes from seeing her family connections as a 'degradation' to allowing Mr Gardiner, the Uncle in trade, to become 'always on the most intimate terms' come the end of the novel. So, through development of morals and search that delves below surface trivialities our protagonists are allowed their happy ending, which is much in contrast to those characters with little choice of few morals. We see that through the use of her comic characters Austen actually demonstrates a much more sinister side to her society, and the constraint felt by women of the time is evidence that she is reporting on much more than just a 'polite society'. 28th January '11 ...read more.

The essay has a very promising beginning, and if it had maintained a sharp focus on 'the confinement of the lives of women' it could have been persuasive. However, the argument begins to ramble, and is overdependent on quotations from critics to the exclusion of textual quotation and engagement with the text. Errors of spelling, grammar and expression undermine the overall effect.
***