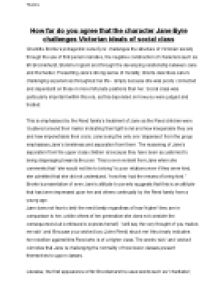 How far do you agree that the character Jane Eyre challenges Victorian ideals of social class?

﻿Thahira How far do you agree that the character Jane Eyre challenges Victorian ideals of social class Charlotte Bronte?s protagonist ?Jane Eyre? challenges the structure of Victorian society through the use of first person narrative, the negative construction of characters such as Mr Brocklehurst, Blanche Ingram and through the developing relationship between Jane and Rochester. Presenting Jane?s strong sense of morality, Bronte describes Jane?s challenging experiences throughout her life - simply because she was poorly connected and dependant on those in more fortunate positions than her. Social class was particularly important within this era, as this depended on how you were judged and treated. This is emphasised by the Reed family?s treatment of Jane as the Reed children were ?clustered around their mama? indicating their tight bond and how inseparable they are and how impenetrable their circle; Jane being the only one ?dispensed? from the group emphasises Jane?s loneliness and separation from them. The reasoning of Jane?s separation from the upper class children is because they have been accustomed to being disparaging towards the poor. ...read more.

In contrast, when Mr Brocklehurst discusses Jane Eyre, he uses negative words such as "ingratitude", "bad" and "dreadful". Jane being stereotyped as a terrible being; automatically indicates the reasoning behind Mr Brocklehurst?s assumptions as the upper and middle classes had no respect towards the working class as they seemed filthy, rude and immoral; the poor were extremely powerless whereas the rich were exceedingly dominant. [She?s still within they?re society yet they are critical to her and she remains firm] However, Jane is also confronted with these attitudes from the servants at Gateshead, she was repeatedly told where she stands as part of the house hold which was ?less than a servant?. ?You ought not to think yourself on equality with the Misses Reed and Master Reed? this clearly indicates that even the servants felt confident to berate and abuse Jane. Jane?s powerlessness is further emphasised through comments such as ?I had nothing to say to these words: they were not new to me? from this it can be inferred that Jane was well used to these degrading comments. ...read more.

As it is difficult for social mobility to occur, people usually married those who were socially equal to them; as a result there was lack of social mobility. Nevertheless, Jane can still love Rochester because he treats her as his intellectual equal, ?my bride is here, because my equal is here; and my likeness? and he is willing to see past her social standing-this is the first time that she has been appreciated and needed by someone, before this she has always been dependent on others and eagerly seeking for her own dependence -she saves him repeatedly and he ends up dependent on her. This highlights Jane challenging conventional ideals of social class as lower class women usually married someone within their class as they were not ?worthy? of anyone above their social standing, therefore indicating Jane?s immoral behaviour. Although, Jane comes across various obstacles because of her social class; she asserts that her poverty does not make her an inferior person; her gradual ascent out of poverty helps her overcome her personal obstacles. Bronte?s Jane Eyre challenges attitudes to social class by defying the rigid structures in place at this time. Written as an autobiography but not anymore ...read more.