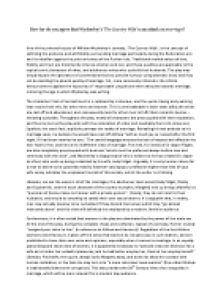 How far do you agree that Wycherleys The Country Wife is an attack on marriage?

﻿How far do you agree that Wycherley?s ?The Country Wife? is an attack on marriage? One of the primary focuses of William Wycherley?s comedy, ?The Country Wife?, is the concept of satirising the pretence and artificiality surrounding marriage particularly during the Restoration era and its rebellion against the prior strictness of the Puritan rule. Traditional marital values of love, fidelity and trust are distorted by intense emotion and l**t, and these qualities are applicable to the typical comic characters of rakes, and adulterous wives who cuckold their husbands. The play may simply expose the ignorance of conventional fools to provide humour using dramatic irony and may not be deriding the amoral quality of marriage. Yet, more commonly inferred is the critical denouncement against the hypocrisy of ?respectable? people and their attitudes towards marriage, mirroring the age in which Wycherley was writing. The characters? lack of contentment in a relationship is obvious, and the quick craving and yearning that results from this, for other men and women. This is unmistakeable in both sexes alike; the wives are cast off and abandoned, and consequently look for other men to fulfil their romantic desires ? initiating cuckoldry. ...read more.

Margery, the eponymous character, is referred to as ?baggage? by her husband throughout the play ? a derogatory term which derides her to a mere object. Through food imagery, women are also likened to ?a private feast? as something to be consumed, to satisfy the men?s hunger and s****l appetite. Pinchwife also uses money and business imagery to extend this notion saying he will give ?five thousand pound? to Sparkish ?to lie with my sister.? It is clear that the male?s intentions revolve around copulation, demeaning the personal and profound qualities of a married relationship. This language is also reflected in the, perhaps comic, perhaps unsettling, constant threat of violence from the aggressive caricature of Pinchwife to Margery; although he never actually hurts her, a married man should never even threaten to lay a hand on his wife. The ending, although conventional in that everything gets resolved and everyone is brought together, clearly depicts how the characters do not care who they marry. Lucy, the stock character of a clever servant, fixes everything and everyone merely pretends that everything is alright, and returns to the status quo. Pinchwife tells himself ?Cuckolds like lovers should themselves deceive?, hence believing what has been said although beneath it all he knows it is not true, illustrating how the marriages in the play are purely based on lies and deceit. ...read more.

Nevertheless, the play opens amid an informal conversation regarding the spread of a rumour of ?damned malady?, devised only so the protagonist, Horner, can sleep with other men?s wives. It is here when the writer begins to censure the corruption of matrimony in Restoration society, and despite Horner offering some positive views of women, it is this rumour that totally encapsulates the entire play, and thus discloses Wycherley?s attack against the sadly typical marriages of the Restoration period. Through his comedy, Wycherley persistently confronts the lack of ?matrimonial love?, and the affectation and hypocrisy that is present throughout Restoration marriages and their corrupt urban lifestyle. Satirising the pretence of the society, Wycherley employs the caricatures of Pinchwife and Sir Jasper Fidget to paint a representative picture of the paranoid and ignorant male personas that ironically lead their wives into the hands of rakes; the large majority of female heroines conform to the stock character of the adulterous wife. Conclusively, it can be taken that although there are subtle hints at hopes of real love entwined throughout the comedy, Wycherley has undeniably crafted a play that carefully attacks the artificiality of marriages in Restoration society. ...read more.