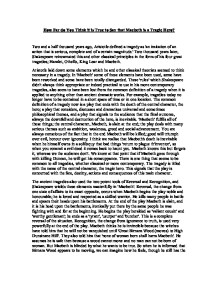 How Far do You Think it is True to Say that Macbeth is a Tragic Hero?

How Far do You Think it is True to Say that Macbeth is a Tragic Hero? Two and a half thousand years ago, Aristotle defined a tragedy as 'an imitation of an action that is serious, complete and of a certain magnitude.' Two thousand years later, Shakespeare reincarnated this and other classical principles in the form of his four great tragedies; Hamlet, Othello, King Lear and Macbeth. Aristotle laid down some elements which he and other classical theorists seemed to think necessary in a tragedy. In 'Macbeth' some of these elements have been used, some have been reworked and some have been totally disregarded. These 'rules' which Shakespeare didn't always think appropriate or indeed practical to use in his more contemporary tragedies, also seem to have been lost from the common definition of a tragedy when it is applied to anything other than ancient dramatic works. For example, tragedies today no longer have to be contained in a short space of time or in one location. The common definition of a tragedy now is a play that ends with the death of the central character, the hero; a play that considers, discusses and dramatises universal and sometimes philosophical themes, and a play that signals to the audience that the final outcome, always the downfall and destruction of the hero, is inevitable. 'Macbeth' fulfils all of these things; the central character, Macbeth, is slain at the end; the play deals with many serious themes such as ambition, weakness, greed and social advancement. You are always conscious of the fact that in the end Macbeth will be killed; good will triumph over evil, honour over ignominy. I think we realise that Macbeth's death is inevitable when he himself owns in a soliloquy that bad things 'return to plague th'inventor', so when you commit a evil deed it comes back to haunt you. Macbeth knows this but forgets it, whereas we the audience don't. ...read more.

When she is going mad he hardly seems to care, and when she commits suicide he doesn't seem very concerned, saying only, 'she should have died hereafter; There would have been a time for such a word'. He has learnt that maybe it's better not to have a confidante, or perhaps as he has become more inhuman he no longer needs one. Macbeth is blind to the possibility that there are holes in the prophecies, which at first seem to pronounce him invincible. We are made aware of the dangers of taking something in a certain light because that is the way we want it to be. Macbeth wants to be safe and secure so he takes the prophecies to mean that he is so. Near the end of the play, Macbeth makes a speech where he says, 'life is but a walking shadow, a poor player, that struts and frets his hour upon the stage, and then is heard no more.' Macbeth has realised the truth about the insignificance of man. He probably feels that his life, everything he has been through, is just a frivolous charade. I suppose the overriding truth that comes out of Macbeth's suffering is the danger of ambition and greed. Ambition causes you to do things you wouldn't normally do; it can be blinding and though it is necessary in some degree, it can be painfully consuming. Macbeth had everything he wanted at the beginning of the play, and then added to that was the title of Thane of Cawdor. But after the witches dangled something more in front of him, he was no longer content with his lot. He became greedy, and driven on by a combination of greed and ambition, he was prepared to do anything to get the title he wanted. A tragic hero's greatness of character and talent is wasted through tragic circumstance. On one level we cannot really say whether Macbeth has a greatness of character because in the play we don't meet him until after he's under the influence of the witches, and then of his ambition and his 'fiendish' wife. ...read more.

Some examples of modern-day tragic heroes are Captain Oates, who died on a return trip from the Antarctic to enable his team to survive, Martin Luther King, who was assassinated because he was a black rights activist, and Gandhi, who was again assassinated while fighting for independence in India. Whichever way you look at him, Macbeth is contemptible, even if you think he was just an instrument of the witches, and unable to escape his fate. In that case he is still loathsome because of the weakness he exhibits with Lady Macbeth and the unnecessary murders of Lady Macduff and all her household. Macbeth achieved nothing terribly momentous in his life, apart from his success as a soldier. But his latter behaviour ruins any favourable impression you might have formed of him. Macbeth did not die in tragic circumstances; he was killed by the husband and father of people he had murdered without a cause; he was defending his unlawful position as King against the claims of the true heir to the crown, and he died as he lived his life: selfishly and thoughtlessly, without putting right or seeming to regret any of the vile acts he has committed or the self-interested pain he has caused. Macbeth does say to Macduff 'But get thee back, my soul is too much charged With blood of thine already', this could be taken that Macbeth doesn't want to commit any more murders, and that maybe he regrets killing Lady Macduff and her children. But I believe that Macbeth doesn't want to fight with Macduff because he was told to 'beware Macduff', and that this is an excuse. I think Macbeth maybe also wanted to reinforce and perhaps gloat over the fact that he had killed Macduff's family while he was in England. So while in a classical sense Macbeth fulfils the criteria for a tragic hero, in my eyes he is neither heroic nor tragic; only selfish, feeble and insatiable. But then I am judging him by the standards of today, and not in the context in which he was written. ...read more.