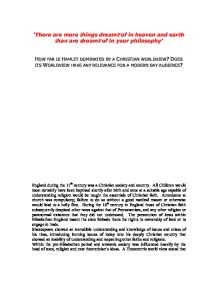 How far is Hamlet dominated by a Christian worldview? Does its Worldview have any relevance for a modern day audience?

'There are more things dreamt of in heaven and earth than are dreamt of in your philosophy' HOW FAR IS HAMLET DOMINATED BY A CHRISTIAN WORLDVIEW? DOES ITS WORLDVIEW HAVE ANY RELEVANCE FOR A MODERN DAY AUDIENCE? England during the 17th century was a Christian society and country. All Children would most certainly have been baptised shortly after birth and once at a suitable age capable of understanding religion would be taught the essentials of Christian faith. Attendance at church was compulsory; failure to do so without a good medical reason or otherwise would lead to a hefty fine. During the 16th century in England those of Christian faith subsequently despised other races against that of Protestantism, and any other religion or paranormal existence that they did not understand. The persecution of Jews within Elizabethan England meant the state forbade them the rights to ownership of land or to engage in trade. Shakespeare showed an incredible understanding and knowledge of issues and crises of his time, introducing burning issues of today into his deeply Christian country that showed an inability of understanding and respecting other faiths and religions. ...read more.

Many examples could be identified however ones of relevance are plenty within 'Hamlet'. Within Act I, Scene I an apparition of King Hamlet appears, which later on within the play urges Hamlet to avenge his death. This would heighten the audience's suspense due to the drama involved. Shakespeare surprises both the audience and the characters within the play by introducing a ghost, creating a hugely effective atmosphere of anxiety and fear throughout the scene. Elizabethan people misunderstood paranormal existences and this phantom would have heightened their (the audiences) suspicions and fears towards them (the ghosts) furthermore. Many people of Shakespeare's time regarded ghosts as the devil himself. The play is very much written in a pro-Christian era and many aspects of Christianity show through. Hamlet's voice comes through however, sceptical of this. Hamlet contemplates the idea of committing suicide within his soliloquy in Act I, Scene II as he cries, 'O that this too too solid flesh would melt, Thaw and resolve itself into a dew, Or that the Everlasting had not fixed his canon 'gainst self-slaughter. O God, O God!' Here Shakespeare shows us that suicide is not favourably looked upon and even seen as an act that would leave you in purgatory (as is King Hamlet's), waiting for one's sins to be forgiven and for redemption to commence itself. ...read more.