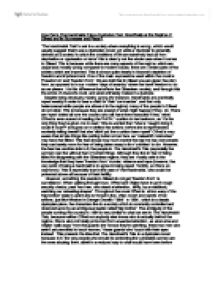 How Far is The Handmaids Tale a Dystopian Text, Specifically at the Regime of Gilead and its Successes and Flaws?

How Far is The Handmaids Tale a Dystopian Text, Specifically at the Regime of Gilead and its Successes and Flaws? 'The Handmaids Tale' is set in a society where everything is wrong, which would usually suggest that it was a dystopian novel, yet while a 'dystopia' is generally defined as a society 'in which the conditions of life are extremely bad as from deprivation or oppression or terror' this is clearly not the whole case when it comes to Gilead. This is because while there are many aspects of the regime which are unjust and morally wrong compared to modern values, there are certain parts of the society which are improved. This is shown quite clearly in Atwood's depiction of freedom and imprisonment. One of the main expressions used within the novel is 'Freedom to' and 'freedom from'. We are told that in Gilead you are given freedom from, as opposed to in our modern 'days of anarchy' where we have freedom to do as we please. It is this difference that affects the Gileadean society, and through this the whole of Atwood's novel, and what ultimately makes it a dystopia. ...read more.

They 'brainwash' the handmaids by showing them old p**********c films and photographs, and by telling them how badly women were treated in 'the time before'. They also insult the previous society by emphasising that women in 'the old days' were disgusting and that they had no self respect. The point of the Red Centre is to turn young, fertile women from 'the time before' into Gilead sympathising Handmaids, and this is most strongly seen affecting Janine. Out of all the people who attend the red centre, she is the one who seems to agree with the regime after being brainwashed by 'the aunts', and in the end, she is the one who is rewarded; she is the only Handmaid we hear about in the novel that actually has a baby. This is significant because it shows that in the dystopian society which Atwood has created, only the people who adhere to the regime are rewarded. Anyone seen to rebel is punished, as is mostly seen in Moira, who escapes the 'Red Centre' after threatening one of the aunts and posing as her to escape. Later in the novel, we see that she has ended up in Jezebel's, the lowest place a woman can get to in the society. ...read more.

The Handmaid's Tale, the handmaids are deprived of love, are oppressed because they are not allowed to think, or have a full life, and they live in terror that they may be executed or sent to 'the colonies' to die. This is the reason that, despite its flaws, Gilead is a success; and this, in itself, makes The Handmaid's Tale a dystopian novel. It is realistic and frightening to read, just like 1984 and Fahrenheit 451, because it connects to so many real-life events that we as a reader feel like it could actually happen in the near future. The use of news stories in the novel such as overfishing and infertility are prevalent in today's society, and the use of surveillance is something which is being documented in our own news. These relations to our reality make the audience aware of how similar Gilead actually is to the society in which we live, and make The Handmaid's Tale far more 'speculative fiction' than simply 'Science Fiction'. The general public opinion seems to be that it is 'incredibly inventive, moving and really quite frightening', and it shows that Atwood gets her main message across when the reviewer says 'let us hope it is not too prophetic. ...read more.