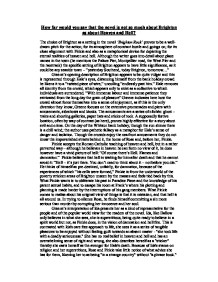 How far would you say that the novel is not so much about Brighton as about Heaven and h**l?

How far would you say that the novel is not so much about Brighton as about Heaven and h**l? The choice of Brighton as a setting in the novel 'Brighton Rock' proves to be a well-drawn pitch for the action; for its atmosphere of constant bustle and goings on; for its close alignment with Pinkie and also as a metaphorical device for depicting the eternal realities of heaven and h**l. Although the writer goes into detail about place names in the town (he mentions the Palace Pier, Montpellier road, the West Pier and the racetrack) the specific setting of Brighton appears to have little significance, as it could be any seaside town - "yesterday Southend, today Brighton, tomorrow..." Greene's opening description of Brighton appears to be quite vulgar and this is represented through Hale's eyes, distancing himself from the bank holiday crowd he likens it to a "twisted piece of wire," uncoiling "endlessly past him." Hale removes all identity from the crowd, which appears only to exist as a collective to which individuals are surrendered. "With immense labour and immense patience they extricated from the long day the grain of pleasure" Greene indicates here how the crowd almost force themselves into a sense of enjoyment, as if this is the only diversion they know, Greene focuses on the extensive promenades and piers with amusements, sideshows and kiosks. ...read more.

Although he has run and separated himself from his past in Paradise Place, the irony of his crimes is that, by silencing Rose, she leads him back to the slums he came from. When Pinkie returns to the poor area from which he came, he and the reader are confronted with the squalid detail of Nelson's Place and Paradise Piece. Although Pinkie despises these areas of Brighton, Green provides us with an insight into his mind: "This was his territory, a few thousand acres of houses, a narrow peninsula of electrified track running to London, two or three railway stations with their buffets and buns." Pinkie is the opposite of the travelled Dallow, to whom he says "I'd feel a stranger away from here...I suppose I'm real Brighton." Pinkie's idea of h**l on earth is best demonstrated after his marriage to Rose, the vulgar domestic and s****l routines he had hitherto tried to evade have trapped him and he is left, in his mind, with only one escape route - to kill Rose. Before Pinkie visits Prewitt he envisions the kind of world described in Faustus and the horror of his present situation - "Now it was as if he was damned already and there was nothing more to fear ever again. ...read more.

The final conclusion of the novel suggests otherwise however as Rose walks "towards the greatest horror of all" - discovering that all the while Pinkie hated her. This ending suggests that neither Pinkie nor Ida's version of life was correct, there is a suggestion though that Pinkie didn't hate Rose like he showed on the outside, when the talk of "tenderness" stirring is introduced the author hints at his real feelings. The irony is however; Rose will never know this. Brighton provides the reader with an analogy for the potential for damnation and reprieve and a famous symbol of Brighton (and the book's title), Ida uses Brighton Rock, as a parallel for human nature. In response to Rose's desperate plea of "people change, he's changed" Ida replies: "Oh no they don't... I've never changed. I'm like them sticks of Brighton rock, bite all the way down and it still reads Brighton. That's human nature." In the case of Pinkie, Ida would stand to be correct although this is a very fatalistic view suggesting that repentance is impossible and only people who have begun good stay good. This would imply that whether one is saved or damned by God depends on what he has determined in advance to be one's character. ...read more.