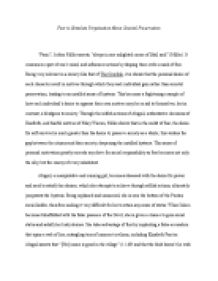 ﻿Fear to Stimulate Perpetuation Above Societal Preservation ?Panic?, Arthur Miller asserts, ?sleeps in one unlighted corner of [the] soul? (Miller). It consumes a spot of one?s mind, and influences actions by draping them with a mask of fear. Being very relevant in a society like that of The Crucible, it is shown that the personal desire of each character result in motives through which they seek individual gain rather than societal preservation, leading to an instilled sense of hysteria. This becomes a frightening example of how each individual?s desire to appease their own motives may be an aid to themselves, but in contrast, a bludgeon to society. Through the selfish actions of Abigail, authoritative decisions of Danforth, and fearful motives of Mary Warren, Miller shows that in the midst of fear, the desire for self-survival is much greater than the desire to preserve society as a whole; this widens the gap between the citizens and their society, deepening the instilled hysteria. This sense of personal motivation greatly exceeds any drive for social responsibility as fear becomes not only the ally, but the enemy of every inhabitant. Abigail, a manipulative and cunning girl, becomes obsessed with the desire for power and need to satisfy her desires, which she attempts to achieve through selfish actions, ultimately jumpstarts the hysteria. ...read more.

Danforth is perceived from beginning to end as an authoritative, dominant figure whose sole desire isn?t necessarily for purity or equality to be established throughout Salem, but rather to maintain his position as a supreme authority. Though Abigail was like the seed, or initial source of the fear, Danforth can be seen as the affirmation. He has the power of convicting the Salem?s inhabitants regardless of facts, but rather ?spectral evidence? as Miller points out and was used to ?control thoughts and actions?. The accusations made weren?t true, but based on fear; in order for one person to save themself, they turned to conviction in which they knew they could save themselves. Thus, by convicting others, this sense of social responsibility is gone and rather everyone is cruelly fighting for their own life through methods which rather than helping the community, greatly impair as the number of convicts rise exponentially. This being said, it?s visible that Danforth is a major source of power and contributor of chaos. His extreme reliance on spectral evidence instills the fear of death and results in self-preservation. Even John Proctor, a man disgusted by society?s new craze, was determined to emit himself from the chaos, but ended up confessing that he ?want[s] [his] life? (4.530) ...read more.

It?s a chaotic world in which everybody is trying to save themselves and the well-being of one?s neighbor is of the least concerns while fighting for one?s own life. Fear is the basis of all paranoia and through Abigail?s seeding, Danforth?s growing and Mary Warren?s cultivating of the hysteria in society, it?s evident that fear is not only a predominant feeling throughout the play, but also a major factor which turns this pure, people-based society into on similar to a savage animal kingdom where each person is fighting to save their own life, disregarding the safeguarding of anyone else. Abigail?s intimidation, Danforth?s status, and Mary Warren?s fear become the stepping stones which Miller points out are the basis for a society that consumes its people. Rather than striving to preserve the structure of society, each individual fights for personal survival, thus creating a chaos-stricken land in which every man is in for himself. Though different motives, the characters still plant the seed of fear, showing that it?s not the problem that causes the hysteria, but rather the solving approach of the people. The problem doesn?t begin on its own, and in the end, rather than benefitting one?s self by lying and seeking personal gains, all these people are doing is further destructing their society, making it nearly impossible to repair. ...read more.