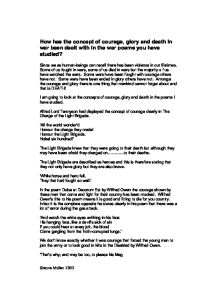 How has the concept of courage, glory and death in war been dealt with in the war poems you have studied?

How has the concept of courage, glory and death in war been dealt with in the war poems you have studied? Since we as human-beings can recall there has been violence in our lifetimes. Some of us fought in wars, some of us died in wars but the majority of us have watched the wars. Some wars have been fought with courage others have not. Some wars have been ended in glory others have not. Amongst the courage and glory there is one thing that mankind cannot forget about and that is DEATH! I am going to look at the concepts of courage, glory and death in the poems I have studied. Alfred Lord Tennyson had displayed the concept of courage clearly in The Charge of the Light Brigade. 'All the world wonder'd Honour the charge they made! Honour the Light Brigade. Nobel six hundred!' The Light Brigade knew that they were going to their death but although they may have been afraid they charged on............to their deaths. ...read more.

going for the excitement of it all and amongst this he dies not only for the R.F.C but also for his country, which is Ireland. The next concept that I will be looking at is glory. In the poem the Soldier that is a sonnet (a 14 line poem) by Rupert Brooke the English Soldier shows glory for his country. 'That is forever England. There shall be In that rich earth a richer dust concealed; He means that if he is killed in Turkey that when his bones turn to dust they will become part of that soil and that country will be better for it as he is an English man. Alfred Lord Tennyson states in his poem that by being a hero they are glorious therefore have glory. 'While horse and hero fell, They that had fought so well.' 'When can their glory fade? O the wild charge they made! ...read more.

The mother was proud of her son. She didn't know of the fact that the officer had lied to her about her son. They thought he was a cold-footed useless swine. The poem shows how the officer didn't care what happened to Jack and it is thought perhaps he tried to injure himself in order to get sent home. '..................... how he'd tried To get sent home, and how, at last , he died, Blown to small bits. And no one seemed to care Except that lonely woman with white hair.' After looking at all the concepts I can only draw one conclusion from them and that is: God gave us a chance in life. He put us on this earth to live a fulfilled life. He did not put us here to fight with our fellow brothers and sisters. We all get one chance of life on this earth so why waste it fighting. No matter how courageous or glorious the war has been there is nothing that can truly justify the fact that all of those thousands of people have been killed. Shauna Mullan 12B2 ...read more.