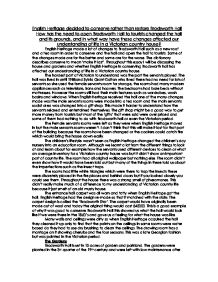 How has the need to open Brodsworth Hall to tourists changed the hall and its grounds, and in what way have these changes affected our understanding of life in a Victorian country house?

English Heritage decided to conserve rather than restore Brodsworth Hall How has the need to open Brodsworth Hall to tourists changed the hall and its grounds, and in what way have these changes affected our understanding of life in a Victorian country house? English Heritage made a lot of changes to Brodsworth Hall such as a new roof and a tea room in order to conserve and the hall and open the hall to tourists. Some of the changes made are for the better and some are for the worse. The dictionary describes conserve to mean 'make it last'. Throughout this essay I will be discussing the house and gardens and whether English Heritage in conserving Brodsworth hall has affected our understanding of life in a Victorian country house. The hardest part of Victorian to understand was the part the servants played. The hall was lived in until 1988and Sylvia Grant-Dalton who lived there had no need for lots of servants so she used the female servants room for storage, the rooms had many modern appliances such as televisions, irons and hoovers. ...read more.

The room had all original wallpaper but nothing else. The room didn't even show how it would have been laid out but many of the things in there told us about the imperfections such as the insect traps. The rooms had little white triangles which were there to trap the insects these were discretely placed in the fire places and behind doors but if you looked closely you could see them. Throughout the house there was a strong smell of pheromones. This didn't really make much of a difference to my understanding of Victorian country life because it just smelt of an old musty house. The entrance hall carpet was all worn and tatty when English Heritage got the hall. English Heritage had the design re-made so that it matched with the stairs. The carpet design is called the 'Brodsworth Star'. The carpet would have originally been made out of wool and today the original thing would cost �45000. ...read more.

Even though we didn't go into all of the rooms it was interesting to see the room that we did see. I think that my understanding of Victorian life was helped a great deal by seeing Brodsworth Hall but I do think that some of their decisions were bad such as the education centre. I agree that an education centre is a good idea but the life of the children is important. Brodsworth Hall is a good place for tourists to go and visit but Historians wouldn't be impressed. Some of the rooms had things wrong with them or things in the rooms were historically inaccurate for example record players and TV's. Brodsworth Hall is definitely a tourists place and probably never will be absolutely accurate to the period. I think that it was a good idea to conserve Brodsworth hall but if they had spent a little more time on it instead of rushing to open the hall to tourists then it could have been better. ...read more.