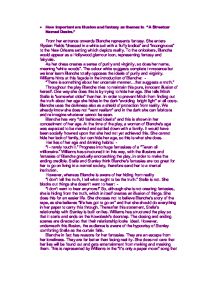 How important are illusion and fantasy as themes in &quot;A Streetcar Named Desire.&quot;

* How important are illusion and fantasy as themes in "A Streetcar Named Desire." From her entrance onwards Blanche represents fantasy. She enters Elysian Fields "dressed in a white suit with a fluffy bodice" and "incongruous" to the New Orleans setting which depicts reality. To the onlookers, Blanche would appear as a Hollywood glamour icon, representing fantasy and fairytale. As her dress creates a sense of purity and virginity, so does her name, meaning "white woods". The colour white suggests complete innocence but we later learn Blanche totally opposes the ideals of purity and virginity. Williams hints at this fa�ade in the introduction of Blanche: - "There is something about her uncertain manner...that suggests a moth." Throughout the play Blanche tries to maintain this pure, innocent illusion of herself. One way she does this is by trying to hide her age. She tells Mitch Stella is "somewhat older" than her. In order to prevent Mitch from finding out the truth about her age she hides in the dark "avoiding bright light" at all costs. ...read more.

Stella is not. She blocks out things she doesn't want to hear: - "I don't want to hear anymore!" So, although she is not creating fantasies, she is hiding from the truth, which in itself creates an illusion of things. She does this for an easier life. She chooses not to believe Blanche's story of the r**e, as she believes "life has got to go on" and that she should do everything in her paper to carry this through. Thereafter this statement, Stella's relationship with Stanley is built on lies. Williams has structured the play so that it starts and ends on the Kowolaski's doorstep. The closing and ending scenes are directed so that their relationship looks ideal. However, underneath this illusion, the audience is aware of the hypocrisy of Stanley comforting Stella as the curtain falls. Blanche in fact has reasons for her fantasies. They are an escape from her loneliness. They are far better than facing reality. She does not care that her lies will be found out and gets entertainment from making and masking them. ...read more.

Since the fall of her family she has had to associate with 'New America' and the working classes. This is another prominent theme in the play, New America versus Old America. Blanche refuses to admit her association with the latter therefore creates a world in her mind where the former still exists. This contrast is most notably portrayed by Blanche and Stanley. Stanley represents a down to earth American man who refuses to play up to Blanche's fantasies: - "Now - let's cut the re-bop!" The r**e scene, which provides the climax of the play, displays the final conflict between Blanche and Stanley, old versus new, and reality versus fantasy. Blanche wears a "rhinestone tiara" represents a queen. This opposes the way Blanche has really been treated. After the death of her husband and family, Blanche was lonely and vulnerable. This lead to people exploiting her. Blanche hates "deliberate cruelty" therefore uses illusion and fantasy to mask her sorrow. In scene ten, Stanley cruelly exploits Blanche, which eventually leads to her destruction. So, in "A Streetcar Named Desire" there are a number of themes such as death and desire, madness and old versus new America, illusion and fantasy are prominent in all of these. ...read more.