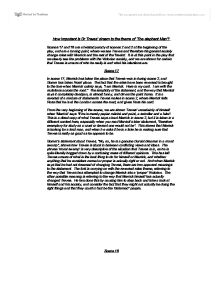 How important is Dr Treves' dream to the theme of 'The elephant Man'? Scenes 17 and 18 are a twisted parody of scenes 2 and 3 at the beginning of the play, and are a turning point, where we see Treves and therefore his general society change roles with Merrick and the rest of the 'freaks'. It is at this point in the play that we clearly see the problems with the Victorian society, and we are shown for certain that Treves is unsure of who he really is and what his intentions are. Scene 17 In scene 17, Merrick has taken the place that Treves was in during scene 2, and Gomm has taken Ross' place. The fact that the roles have been reversed is brought to the fore when Merrick calmly says, "I am Merrick. Here is my card. I am with the mutations across the road." The simplicity of the statement, and the way that Merrick says it completely deadpan, is almost funny, and drives the point home. It is a reversal of a mixture of statements Treves makes in scene 2, where Merrick tells Ross that he is at the London across the road, and gives Ross his card. From the very beginning of the scene, we are shown Treves' uncertainty of himself when 'Merrick' says "If he is merely papier m�ch� and paint, a swindler and a fake". ...read more.

Once again this is a parody of Merrick's deformities, as seen in these quotes: "From the brow there projected a huge bony mass like a loaf... From the upper jaw there projected another mass of bone. It protruded from the mouth like a pink stump, turning the upper lip inside out, and making the mouth a wide slobbering aperture... The deformities rendered the face incapable of the expression of any emotion whatsoever". However, it goes deeper into showing Treves' true personality. The 'normal vision of benevolent enlightenment' refers to the way in which Treves and his peers are so confident in what they are doing and that their reasons are correct. This continues with the statement about him being incapable of self critical speech, which was a general 'virtue' of the Victorian people in the play; in that they are all so confident of what they are doing is right, that they do not for a second stop and think about whether it really is. There is, however, one important exception to this rule: Mrs Kendal, who is the first person to properly try to understand Merrick without trying to change him. Next, Merrick says "The heart showed signs of worry at this unchanging yet untenable state." This is showing the way in which Treves has recently begun to doubt himself and his motives, and yet is continuing to do things in his usual manner because ...read more.