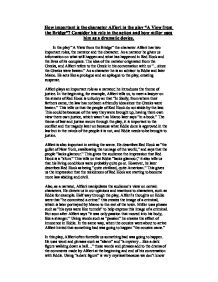 How important is the character Alfieri in the play &quot;A View from the Bridge&quot;? Consider his role in the action and how miller uses him as a dramatic device.

How important is the character Alfieri in the play "A View from the Bridge"? Consider his role in the action and how miller uses him as a dramatic device. In the play "A View from the Bridge" the character Alfieri has two important roles, the narrator and the character. As a narrator he gives us information on what will happen and what has happened in Red Hook and the lives of its occupiers. The idea of the narrator originated from the Greeks, and Alfieri refers to the Greek in his conversation with us "...since the Greeks were beaten." As a character he is an advisor to Eddie and later Marco. He acts like a prologue and an epilogue to the play, creating suspense. ...read more.

Alfieri is also important in setting the scene. He describes Red Hook as "the gullet of New York, swallowing the tonnage of the world," and says that the people "lacks glamour." This gives the audience the impression that Red Hook is a "slum." This tells us that Eddie "lacks glamour," it also tells us that his living conditions were probably quite poor. However, he later describes Red Hook as being "quite civilised, quite American." This gives us the impression that the residences of Red Hook are starting to become more law abiding and civil. Also, as a narrator, Alfieri manipulates the audience's view on certain characters. He directs us in our opinions and reactions to characters, such as Eddie for example. ...read more.

Using "a dark figure" is very mystical because we don't know what the person looks like, we don't know what's in Eddie's mind. Alfieri creates suspense by giving warnings of what is to come with out giving too much away. Alfieri provides a bridge between the audience and the characters. It is almost as if the title "A View from the Bridge" really means a view from Alfieri. We need his help to understand the character so we can sympathise with them. In conclusion, I think that the character Alfieri plays a very important role in the play. He gives background information on the area and the characters; he establishes the themes and ideas that are important to the play. In my opinion, if the character Alfieri was not in the play, the play would have lost its drama because there would be no one to give warnings of on coming events. ...read more.