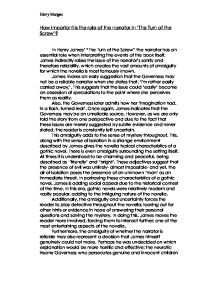 How important is the role of the narrator in 'The Turn of the Screw'?

How important is the role of the narrator in 'The Turn of the Screw'? In Henry James' "The Turn of the Screw" the narrator has an essential role when interpreting the events of the book itself. James indirectly raises the issue of the narrator's sanity and therefore reliability, which creates the vast amounts of ambiguity for which the novella is most famously known. James makes an early suggestion that the Governess may not be a reliable narrator when she states that: 'I'm rather easily carried away.'. This suggests that the issue could 'easily' become an obsession of speculations to the point where she perceives them as reality. Also, the Governess later admits how her 'imagination had, in a flash, turned real'. Once again, James indicates that the Governess may be an unreliable source. However, as we are only told the story from one perspective and due to the fact that these issues are merely suggested by subtle evidence and never stated, the reader is constantly left uncertain. This ambiguity adds to the sense of mystery throughout. This, along with the sense of isolation in a strange environment described by James gives the novella typical characteristics of a gothic novel. ...read more.

In the beginning of the novella James describes how the Governess 'succumbed' to the 'seduction exercised by the splendid young man' who was her employer, the handsome uncle. It also tells of how she had 'passion' for him explaining why she may have fantasised over his approval. This may lead to the interpretation that Governess' repression has caused her perceptions to become her reality. Her courage and heroism is simply an attempt to show her value to her uninterested employer of whom she is so lustful. This indication of s****l repression is shown by the Governess' description of Peter Quint. She describes him as 'Remarkably!' handsome and to have 'good features'. She also claims 'he's like nobody' suggesting another element of attraction towards him. Additionally, she claims he gives a 'sense of looking like an actor'. It continues to imply he's in the master's clothes as Quint used to do previously, acting as a surrogate for the master. This unusual fascination with the males in the novella is supporting evidence that she is s******y repressed and is therefore an unreliable narrator. However, there is another possible explanation for the Governess' neurotic behaviour and possible insanity. The master tells the Governess that in working for him she would have 'supreme authority' at the household. ...read more.

Another reason why the Governess may be considered an unreliable narrator is due to the lack of evidence she provides for the ghosts' existence. For example, when describing her experience with Mrs.Jessel, she explains how she 'felt her' as apposed to seeing her. Also, when she claims to have has a conversation with Mrs.Jessel, she there is only mention of what the Governess says, she says nothing about anything Mrs.Jessel said. Throughout the novella, the structure of sentences created by James when describing the narrators' thoughts adds to her interesting role. James uses particulary long sentences, including many commas in her thoughts/narrations. This generates the impression that they are the Governess' frantic thoughts, adding to her portrayal as a neurotic, unreliable, mad woman. Ultimately, the fact that the Governess does not seem to fufil the traditional role of the narrator: re-telling the story clearly. She seems to be involved to suggest to us that our perceptions are unreliable and that the truth is hard to obtain, rather than merely describing as the reader has come to expect from narrators. This appears to be the main theme of the story and is its most intruiging aspect, giving it its origionality and individuality. Therefore, the narrators role in 'The Turn of the Screw', is abundantly important and significant. 1,301 Words. Harry Morgan ...read more.