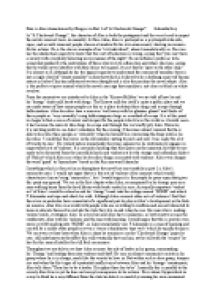 How is Alex characterised by Burgess in Part 1 of A Clockwork Orange?

﻿How is Alex characterised by Burgess in Part 1 of ?A Clockwork Orange?? Gabriella Guy In ?A Clockwork Orange?, the character of Alex is both the protagonist and the vessel used to impart the novels unusual views on morality. At face value, Alex is portrayed as a psychopath who robs, rapes, and assaults innocent people chosen at random for his own amusement, showing no remorse for his actions. He is the classic example of an ?evil individual?, almost unrealistically so. He even has the intellectual capacity to know that this sort of behaviour is wrong, saying that "you can't have a society with everybody behaving in my manner of the night". He nevertheless professes to be somewhat puzzled by the motivations of those who wish to reform him and others like him, saying that he would never interfere with their desire to be good; it's just that he "goes to the other shop". It is almost as if, although he has the logical capacity to understand the concept of morality, there is not a single shred of ?innate morality? in him that which is believed to be a defining aspect of human nature in Judeo-Christian influenced western thought and is also the position the novel adopts. ...read more.

I would argue that this is proven even more so with breaking into ?HOME?, as Alex immediately sees F.Alexander is a man of learning and can tell he is unlike other people or even a ?starry schoolmaster type veck? which he equally despises. We can even see how later when Alex is alone he reminisces on the ?Clockwork Orange? paper he saw, still unbeknown to the affect this will eventually have on him, yet he still with the ?respect? he has for this man of intellect he still feels no remorse. Throughout we are able to see how Alex assumes the role of leader in his group, commanding his ?Droogs? and leading them into violence and theft. He runs an almost communist society in his group where he is in charge, much like the society he lives in. But within such a close group, tempers rise and when the first signs of a potential conflict arise between Alex and his ?droogy? counterparts, Alex tells them ?There has to be a leader. Discipline there has to be?. Ironically this is parallel to the society Alex lives in yet he does not accept consequence to his actions. He is almost hypocritical in a way to think he is any different from the state he detests so much by running his own communist society. ...read more.

Finally we must look at how Burgess has cleverly manipulated the character of Alex for his own views and messages to be portrayed. In hindsight we are aware that Alex progresses throughout the novel from a violent individual to one of somewhat of a reformed character by the end. His development ironically mimics that of Alex?s beloved ?Beethoven?s 9th? which is meant to reflect human goodness and the development of mankind. The start representing the lowest rungs of h**l, the second represents human happiness from everyday pleasures, the third represents mankind turning to religion and the fourth and final part represents humanity at the height of glory coming from the depths of despair. Alex will make this transition but is currently in this stage of the lowest rungs of h**l, which is why I think Burgess has been so eager to exaggerate Alex?s character. It shows us the true, harsh and desperate attempts mankind will make to reach glory, which for Alex is free will. When mankind is oppressed in such a way that it takes the freedom of life and their will, they will commit such atrocities and rebel with such pure animalistic instincts. Alex embodies the true meaning of being human, right down to the basic instincts. ...read more.