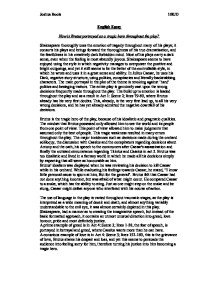 How is Brutus portrayed as a tragic hero throughout the play?

English Essay How is Brutus portrayed as a tragic hero throughout the play? Shakespeare thoroughly uses the emotion of tragedy throughout many of his plays; it consorts his plays and brings forward the thoroughness of his true dramatisation, and the fearfulness in his creatively dark forbidden mind. Most of his plays carry a dark sense, even when the feeling is most absurdly joyous. Shakespeare seems to have enjoyed using the style in which negativity manages to overpower the positive and bright outgoings, and yet it still seems to be the better of the controllable style, in which he wrote and uses it in a great sense and ability. In Julius Caesar, he uses his Dark, negative story structure, using politics, conspiracies and literally backstabbing characters. The main portrayal in the plot of the theme is revoking against 'hard' politics and besieging traitors. The entire play is genuinely cast upon the wrong decisions frequently made throughout the play. The build up to emotion is leaded throughout the play and as a result in Act 1: Scene 2; lines 79-80, where Brutus already has his very first doubts. ...read more.

Shakespeare, had a manner as to creating the imaginative speech, but instead of the basic formatted approach, it contains an utmost unusual direction into greed, love honour, pride and most definitely justice. A prime example of greed is in Act 4: Scene 3; lines 1-28, the fear of speech, is portrayed in betrayal and greed, where Cassius wants more than he can have. A conscious example of love is in Act 4: Scene 3; lines 152-160, this is the grievance of love, Brutus shares his despair and loss, and yet this seems to persuade the audience into feeling sorry for him, therefore turning his justice into him becoming a tragic hero. A defiant illustration of honour is indeed a case in Act 5: Scene 3; lines 33-46, There is an impact of betrayal into the suicide assistance, there is also a undignified blackmail forced easily onto the servant, Pindarus, helping assist into the suicide, which of course he took the opportunity extremely easily, as this meant freedom, and quick escape from the invasion. ...read more.

and there was also a great divide of the people who abided to these rules, and the challenging, but not overthrowing, persevering renaissance theorists could cause collateral damage of it was needed, so conspirators at the time were possibly thought of around the country. Many people at the time were also originating there background from a source of the Romans/the Roman Empire. The play is based around greed, and getting too much of it- but the existence in this play is sympathetic- towards not Caesar, but to Brutus, this is why the play is so wisely positioned as to who the audience feels sorry for, yet the person you most probably shouldn't this converts him not as a hero but foe. The surprising, or to many, the least surprising effect as to the result in the end of the play, lead to the state of affairs within Brutus coinciding into assisted suicide, in the absence of the betrayal, deceit and all anger, Brutus was some how was revealed and appeared to be a major tragic hero, not through the whole play, but assumed a hero towards the end. This stated a finalisation to persuade the audience to think it that way. Joshua Bools 10K/D ...read more.