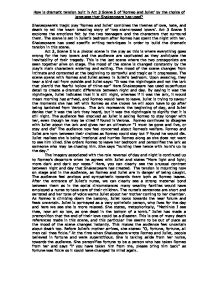 How is dramatic tension built in Act 3 Scene 5 of 'Romeo and Juliet' by the choice of language that Shakespeare has used? Shakespeare's tragic play 'Romeo and Juliet' combines the themes of love, hate, and death to tell the heart breaking story of 'two star-crossed lovers'. Act 3 Scene 5 explores the emotions felt by the two teenagers and the characters that surround them. The scene is set in Juliet's bedroom after Romeo has spent the night with her. Shakespeare has used specific writing techniques in order to build the dramatic tension in this scene. Act 3, Scene 5 is a pivotal scene in the play as this is where everything goes wrong for the two lovers and the audience are captivated as they anticipate the inevitability of their tragedy. This is the last scene where the two protagonists are seen together alive on stage. The mood of the scene is changed constantly by the play's main characters entering and exiting. The mood of the scene changes from intimate and contented at the beginning to sorrowful and tragic as it progresses. The scene opens with Romeo and Juliet asleep in Juliet's bedroom. Upon awaking, they hear a bird call from outside and Juliet says: "It was the nightingale and not the lark that pierc'd the fearful hollow of thine ear" Here Shakespeare has used superfluous detail to create a dramatic difference between night and day. By saying it was the nightingale, Juliet indicates that it is still night, whereas if it was the lark, it would mean morning has arrived, and Romeo would have to leave. ...read more.

Her answer to her mother is careful since she uses ambiguous language. The entrance of Lord Capulet increases the tension on stage as he too is outraged that Juliet has declined the marriage proposal to Paris. Shakespeare has conveyed Lord and Lady Capulet to be very similar personalities. Both are harsh, sharp and short-tempered characters. Lord Capulet tries to reason with his daughter rather than shouting at her (for a little while). The first sentence that Lord Capulet says on stage is littered with alliteration, he says "When the sun sets, the air doth drizzle dew," he then carries onto say "but for the sunset of my brother's son, it rains downright." This is an extended metaphor, where Lord Capulet is comparing Juliet's weeping to a rainstorm. This effects the tension as Lord Capulet is mocking Juliet's despair and seems to be concerned for her feelings, which gives Juliet a small moment of hope. When Lord Capulet hears that Juliet's rejected Paris's offer of marriage, he reacts similarly to Juliet when she first heard about the marriage. He is as unsympathetic to Juliet as his wife and Lord Capulet speaks to Juliet irrationally as he does not consider her feelings on the matter. Lord Capulet starts shouting abuse at Juliet, this shocks the characters on stage and the audience because previously we have seen him to be a relatively calm person without a temper. From his tone of voice we can hear he is angry. ...read more.

As the nurse exits, in Juliet's final soliloquy, she refers to the nurse as a damned old woman. She says "If all else fail, myself have the power to die." This indicates juxtaposition. This is significant to the end of the scene as Juliet's only power and choice is that of her life and whether to take it away or not. Juliet has now reached her most desperate point and is contemplating suicide. This leaves the audience in shock, awaiting the next scene. In Act 3, Scene 5 Juliet's world has been turned upside down. She has been threatened, betrayed by her confidante, and finally contemplates suicide as her only release. Shakespeare has used language with many double meanings which the audience can understand though the characters remain in the dark. This scene changes the whole play as Juliet and Romeo are now in grave danger of being found out. There is a contrast of relationships between Romeo and Juliet and Juliet and Lord and Lady Capulet. The relationship between Romeo and Juliet is intimate and loving, and once Romeo exits, that love is turned into cold, harsh behaviour from Juliet's response to her parent's demands over the wedding to Paris. Shakespeare uses a combination of figurative language, imagery and dramatic irony to create a great sense of tension with disastrous consequences in the scene. Throughout the scene, more has been revealed to the audience than the characters as Shakespeare creates dramatic irony. Dramatic irony has been used to drive the expectations of the audience for the scenes that follow. ...read more.