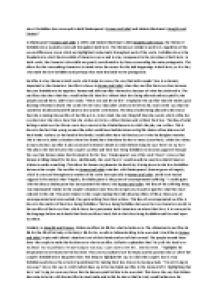 How is forbidden love conveyed in both Shakespeares Romeo and Juliet and Malorie Blackmans Noughts and Crosses?

Transfer-Encoding: chunked ﻿How is forbidden love conveyed in both Shakespeare?s Romeo and Juliet and Malorie Blackman?s Noughts and Crosses? In Shakespeare?s Romeo and Juliet (c.1595) and Malorie Blackman?s 2001 Noughts and Crosses, the theme of forbidden love is greatly conveyed throughout both texts. The themes are similar in each text, regardless of the severe differences in era which are highlighted contextually throughout each of the works. Forbidden love is the foundation to which the downfalls of characters occur and is a key component to the storylines of both texts. In both works, the character?s downfalls are greatly contributed to by those surrounding the main protagonists. This allows for the surrounding characters to stand out as the causes for the bad happenings in both texts, as it is they who make the love forbidden and perhaps thus more desirable to the protagonists. Sacrifice is a key theme in both works which helps to convey the way that both couples? love is extremely important to the characters. Sacrifice is shown in Romeo and Juliet when they sacrifice their own lives because they are forbidden to be together. Romeo and Juliet sacrifice themselves because of what they believed in. The sacrifices also show that they would rather die than live without their love being allowed and accepted by the people around them. Juliet?s last words, ?There rust and let me die?, emphasise the sacrifice that she makes upon learning of Romeo?s death. The words ?let me? show that Juliet wishes to be left to die, much in the way that she wanted to be allowed and left alone to love and be with Romeo. The idea of Juliet being allowed to die shows that she is making the sacrifice of her life as it is, in her mind, the only thing left that she can do which will be her own decision. ...read more.

He has realised what has been lost because of the families? differences. Referring to Montague as ?brother? may also indicate the way that Capulet feels guilt and remorse for what the situation has resulted in. In religious terms, ?brother? can also be used as a way to refer to a respected fellow male of the same faith. Since the play is set in Catholic Verona, it is possible that Shakespeare uses this language to suggest the respect from a religious perspective that Capulet wishes to show for Montague. This highlights that the families are not so different and shows that they do share similarities, regardless of their great feud. When Capulet exclaims ?Poor sacrifices of our enmity!? Shakespeare demonstrates that Capulet understands exactly why Romeo and Juliet sacrificed themselves. The word ?our? shows that he accepts the shared blame for the deaths of the pair. The word ?enmity? connotes friction and hostility, which evidences the severity of the feud. The exclamation point after ?enmity? also helps to portray Capulet?s heartache and remorse as it makes his statement more dramatic and as though he has come to a great realisation. The tone created by the punctuation results in the strong, powerful man seeming helpless and remorseful, allowing the audience to recognise Capulet?s downfall just as he has. On the contrary, Callum?s death in Noughts and Crosses does not seem to affect the surrounding characters to the same extent as the tragedy in Romeo and Juliet does. Whilst Romeo and Juliet choose to sacrifice themselves, Callum is forced into execution after refusing to allow his unborn child to be executed. This may explain the neutral reaction after his death, because it was planned and intentional. ...read more.

It highlights the way in which even they felt threatened to share their opinions and beliefs. This conveys the way in which even the Crosses found it hard to speak out against a firm, in place system. Jasmine?s insistence that ?And that?s not to leave this room? backs up the idea that Crosses were afraid to speak out for what was right. Jasmine shows that even she is fearful of what would happen if people knew that she attempted to help a Nought family. Both novels convey helpers or assistants that attempt to help the different situations along the way. Friar Lawrence does it because he openly believes that it is the right thing to do. On the other hand, Jasmine Hadley acts upon her guilty conscience for the unfair way that the Noughts are treated. This conveys the way in which Friar Lawrence as a helper is selfless and helping for the best intentions, whilst Jasmine Hadley is helping because of her guilty conscience and inability to speak out for what she believes is right. Both works have clear themes of forbidden love shown throughout each text. Whilst the texts are both written by two very different writers and set in extremely different times, the themes and ideas are still similar throughout. The strong link between the two texts is the way in which the surrounding characters impact each of the situations and alter the end result of both texts. Without the surrounding characters, there would be no forbidden love and thus no storyline for either of the texts. Both texts provoke thought amongst the audience as to whether the dramatic acts of that characters will alter the society?s views in each of the texts, or whether life will stay the same; cruelly ignoring what has been lost and what has been broken beyond repair. ...read more.