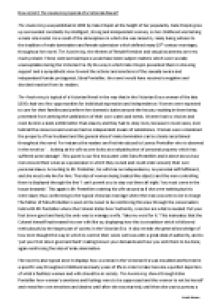 How is Kate Chopin's &quot;The Awakening&quot; typical of a Victorian novel?

﻿How is/isn?t The Awakening typical of a Victorian Novel? The Awakening was published in 1899 by Kate Chopin at the height of her popularity. Kate Chopin grew up surrounded constantly by intelligent, strong and independent women; so her childhood was lacking a male role model. As a result of the atmosphere in which she was raised in, rarely being witness to the tradition of male domination and female submission which defined many 19th century marriages, throughout her novel, The Awakening, the themes of female freedom and s****l awareness are very much present. These controversial topics would have been subject matters which were socially unacceptable during the Victorian Era. By the way in which Kate Chopin presented them in showing support and a sympathetic view toward the actions and emotions of the s******y aware and independent female protagonist, Edna Pontellier, the novel would have received a negative and shocked reaction from its readers. The Awakening is typical of a Victorian Novel in the way that in the Victorian Era a woman of the late 1800s had very few opportunities for individual expression and independence. Women were expected to care for their families and perform her domestic duties around the house; resulting in them being prevented from seeking the satisfaction of their own wants and needs. ...read more.

The novel expresses how Mr Pontellier believed his wife to be delirious when she started to rebel and show traits of independency, however due to the way in which women were raised ?he could not see that she was becoming herself? finally. Edna was ?casting aside that fictitious self? which is stated in the novel to be ?assumed like a garment with which to appear before the world?. This supporting how women portrayed an ideal representation of themselves when in company of others in society, however it was not their true self being shown. The novel also indicates how it was typical of women in the Victorian Era to marry before they fell in love, in many cases in was to do with them marrying into wealth, which was perceived to be more significant than following the heart?s desire; ?she grew fond of her husband?, insinuating that she had not always been fond of her husband and was only now after marriage and children beginning to ?grow fond?. Although men in the Victorian Era were reportedly in charge of women, Edna Pontellier defies this typical role of women in the novel The Awakening and challenges the Victorian Society through the way in which she seeks independence. ...read more.

Even though Edna?s awakening leads to her suffering and eventual suicide, Edna displays that she thinks the suffering was worth the enjoyment, understanding and fulfilment which she got out of awakening and finding her independence and self-awareness. Edna expresses how she believes that the slight freedom she experienced was worth a lifetime of the semi-conscious submission that defined her former existence. In conclusion it can clearly be seen that The Awakening is typical of a Victorian Novel since it portrays how woman had a certain role within the household which they were expected to keep in line with and never exceed over that line, possessing their own thoughts, feelings or actions; they were to be suppressed and be constantly submissive to men. It is also typical due to the way in which marriage was seen to be a social event that if married to someone who was high in society, you were set to lead a well provided lifestyle. It is also apparent in the novel, again supporting that it is a typical Victorian novel, that you do not reveal your true self until after the marriage. Finally it is typical because many Victorian novels challenge the ideal image of the perfect woman in the Victorian society and encourage some form of independence through this, which again is displayed in The Awakening. Sarah Barnes ...read more.