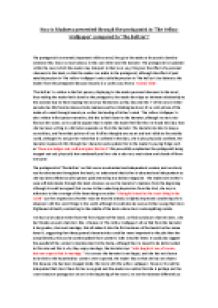 How is Madness presented through the protagonist in The Yellow Wallpaper compared to The Bell Jar?

﻿How is Madness presented through the protagonist in ?The Yellow Wallpaper? compared to ?The Bell Jar?? The protagonist is extremely important within a novel, they give the reader a focus and a bond to someone they know so much about, in this case Esther and the Narrator. The protagonist is explained within the novel which the reader may interpret in their own way; this gives the effect of a personal closeness to the book, so that the reader can relate to the protagonist, although the effect of post natal depression in ?The Yellow Wallpaper? and suicidal depression in ?The Bell Jar? also distances the reader from the protagonist because insanity is a world away from a ?normal mind?. ?The Bell Jar? is written in the first person, displaying to the reader personal closeness to the novel, thus making the reader feel a bond to the protagonist, the reader develops an intimate relationship to the narrator due to them reading the novel as themselves as they become the ?I? of the novel. Esther narrates her life from her descent into madness and her climbing back out; it's a vivid picture of the inside of a mind through insanity as well as the healing of Esther?s mind. ...read more.

Although there is a tragic side of Esther?s self critical attitude this is that she is so ruthless with herself it makes her self destructive; this makes Esther feel like she?s a stranger to herself, even when Esther looks into a mirror she doesn?t see herself; she sees a distorted face. Esther literally takes on a different personality, especially around men, for example Elly Higginbottom, so we must ask ourselves as the reader, is she hiding her identity for them or for herself? For example when in the bar Esther states ?I felt myself melting into the shadows like the negative of a person I'd never seen before in my life? this shows us that Esther feels socially invisible and is jealous of Doreen, which presents her to be shy and nervous. Also the fact that Esther actually does take on another personality could be a link to multiple personality disorder reinforcing the idea of madness through the protagonist. Through a modern perspective there would be more sympathy for the protagonist as we understand mental illnesses better. When looking at the titles of the novels we can see how significant they are to the novel itself. It could be argued that Esther is saying that her life is distorted like it would be if you were looking through a bell jar, ...read more.

This affects the reader by giving them a personal closeness to the protagonist. In ?The Yellow Wallpaper? as the Narrator?s prose becomes more urgent for example the Narrator says ?Life is very much more exciting now than it used to be. You see I have something more to expect, to look forward to, to watch. I really do eat better, and am more quiet than I was? we can see through this quote that the narrator truly has lost her sanity because she has accepted that something is wrong with her, and that she has changed. Whereas Esther?s narrative becomes bemused for example ?I wondered what terrible thing it was that I had done? showing there is a difference in their madness which presents the protagonists as alone, because we don?t understand the texts as easily, showing they are slowly being cut off from the world. Whilst the protagonists are cut off from the world they focus on other things, for example the narrator in the Yellow Wallpaper states ?on a pattern like this, by daylight, there is a lack of sequence, a defiance of law, that is a constant irritant to a normal mind? showing that she has nothing else to concentrate making her lose her mind, it should be noted that she says a ?normal mind? explaining to the reader that she understands that she has lost her sanity. Word count: 2,183 ...read more.