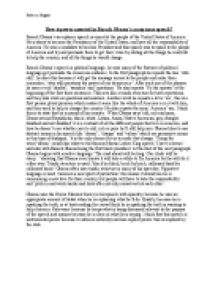 How is power asserted in Barack Obamas acceptance speech?

﻿Rebecca Hughes How is power asserted in Barack Obama?s acceptance speech? Barack Obama?s acceptance speech is aimed at the people of the United States of America. He is about to become the Presidency of the United States, and have all the responsibility of America. He was a candidate to become President and this speech was to speak to the people of America and try and persuade them to get their votes by stating all the things he could do to help the country, and all the things he would change. Barack Obama?s speech is political language; he uses many of the features of political language get persuade the American audience. In the first paragraph he repeats the line ?who still?, he does this because it will get the message across to the people ...read more.

He also repeats the noun ?America? too; I think this is to state that he is proud of his country. When Obama says ?old, rich and poor, Democrat and Republican, black, white, Latino, Asian, Native American, gay, straight, disabled and not disabled? it is a contrast of all the different people that live in America, and how he doesn?t care whether you?re old, rich or poor he?ll still help you. Obama likes to use abstract nouns in his speech like ?dream?, ?change? and ?values? which are persuasive nouns in this type of dialogue, ?it is the only chance for us to make that change.? Using the word ?dream? could also relate to the famous Martin Luther King speech ?I have a dream? and also with Barack Obama being the first black president. ...read more.

Figurative language is used ?summon a new spirit of patriotism? this makes it sound like he is summoning a new love for their country, but people will have to take the responsibility and ?pitch in and work harder and look after not only ourselves but each other?. Obama uses the Grices Maxims theory in his speech with quantity, because he uses an appropriate amount of detail when he is explaining what he?ll do. Quality, because he is speaking the truth, or at least making the crowd think he is speaking the truth in wanting to help America. Relevance because he keeps what is being discussed relevant to the purpose of the speech and manner because he is clear in what he is saying. I think that this speech is instrumental power because it enforces authority and has explicit power that is imposed by the state. ...read more.