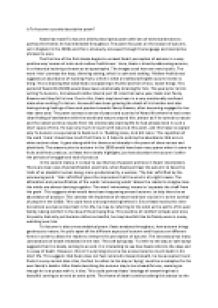 How is Romanticism conveyed in Keats To Autumn'?

Transfer-Encoding: chunked ﻿Is To Autumn a purely descriptive poem? Keats has made To Autumn a fairly descriptive poem with lots of technical devises to portray the themes he has imbedded throughout. The poem focusses on the season of autumn, set in England in the 1800s and this is obviously conveyed through the language and descriptive phrases he uses. The first line of the first stanza begins to unravel Keats? perception of autumn in a very positive way ?season of mists and mellow fruitfulness.? Here, Keats is directly addressing autumn, in a rhetorical technique known as an apostrophe. The images used here are very bucolic. The word ?mist? portrays the hazy, dimming setting, which is calm and settling. ?Mellow fruitfulness? suggests an abundance of ripening fruits, which is what a traditional English autumn tends to bring. This is showing that what Keats is explaining is fruitful and full of nice, sweet things. ...read more.

In the second stanza, it is clear to see themes of passion and love in Keats? descriptions. There are clear uses of personification used here, when Keats portrays the autumn to have the traits of an idealistic human being, more predominantly, a woman. ?Thy hair soft-lifted by the winnowing wind.? ?Hair soft-lifted? gives the impression that the wind is at a light breeze. The alliteration and personification of the words ?winnowing winds? allows the reader to imagine how the winds are almost dancing together. The word ?winnowing? means to ?separate the chaff from the grain?. This suggests what would have been happening around autumn, to help there be an abundance of produce. This conveys the importance of nature and how crucial it is to the survival of people in the 1800s. This could have a strong meaning behind it. Since Keats had by this time lost almost everyone important in his life, he may be referring to the wind as the spirits of his past family, taking comfort in the idea of them being free. ...read more.

He uses the juxtaposition ?lives or dies? to contrast the idea of life continuing and life ending. The usual ideology of death is grief and upset to those who feel the backlash of it. Keats? use of death as a theme shows the reader that he is beyond the grief and heartbreak. He has allowed himself to come to very natural terms with it and goes as far as to use it in his usual vocabulary in his poems. Death here Is shown to be something that happens all the time. The ?day dying? suggesting how he is expectant of everything dying in the end. It is not of a shock to him anymore. To Autumn really allows the reader to understand and comprehend Keats? emotions towards death and passion after the events in his life. I would say that as much as the poem is descriptive, it is also very analytical and has many imbedded themes throughout. These other components aside from description are important to allowing the reader to understand Keats? mental state, and to really understand the feelings and ideas of a Romantic poet. ...read more.