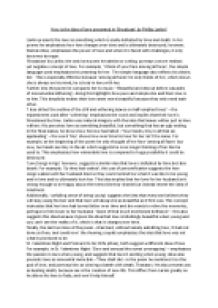 How is the idea of love presented in Broadcast by Phillip Larkin?

﻿How is the idea of love presented in ?Broadcast? by Phillip Larkin? Larkin presents the love as something which is easily defeated by time and death. In his poems he emphasises how love changes over time and is ultimately destroyed, however, Dannie Abse, emphasises the power of love and when it is faced with challenges, it only becomes stronger. ?Broadcast? by Larkin, the only love poem he admits to writing, portrays a more realistic yet negative concept of love. For example, ?I think of your face among all faces?, the simple language used emphasises his yearning for her. The simple language also reflects his desire; her. This is especially effective because ?among all faces? he only thinks of her, which shows she is always on his mind; he is truly in love with her. Further into the poem he compares her to music ??Beautiful and devout before cascades of monumental slithering?- doing this highlights how pure and simple she and their love is to him. ...read more.

This emphasises how vulnerable love is compared to huge possibility it could be destroyed. ?Love Songs in Age? however, suggests a similar idea that love is defeated by time but also death. For example, ?So they had waited?, this use of personification suggests the love songs waited until her husband died so they could remind her what it was like to be young and in love and to ultimately hurt her. This idea implies that her love for her husband isn?t strong enough to be happy about the memories they shared but instead resent the idea of loneliness. Additionally, ?unfailing sense of being young? suggests the idea that everyone believes they will stay young forever and that love will always be as beautiful as it first was. This concept insinuates that her love had turned bitter over time and she wants to relive the memories, perhaps to feel closer to her husband. ...read more.

?Postcard to his Wife? presents love in a much stronger sense, and how it lives with you forever, for example, ?So come home now. The beds too big! Make excuses?, the short sentences used emphasise his desperation to be with his wife again. Although he misses her, he presents love as everlasting, and even though she?s dead, his love for her will never die. Furthermore, ?Blessed, mimic the old gods?, this shows how he wants to express his love for her in a physical way, and he feels blessed to have been with her. To conclude, Larkin presents love as something that will fade, and not worth fighting for. He doesn?t focus on the positives to being in love, he focuses purely on his pain and anguish at the idea his love is fading, which isn?t really love at all. Abse however portrays his love as growing stronger for his wife even though she has died, he?s happy to have met her and to be in love with her. ...read more.