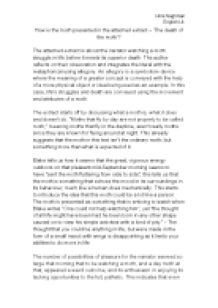 How is the moth presented in the attached extract The death of the moth?

﻿Hirra Naghman English Lit. How is the moth presented in the attached extract ? ?The death of the moth?? The attached extract is about the narrator watching a moth struggle in life before it meets its superior death. The author reflects on their observation and integrates the literal with the metaphorical using allegory. An allegory is a symbolism device where the meaning of a greater concept is conveyed with the help of a more physical object or idea being used as an example. In this case, life?s struggles and death are conveyed using the movement and attributes of a moth. ...read more.

This starts to introduce the idea that this moth could be a lot like a person. The moth is presented as something that is enticing to watch when Blake writes ?One could not help watching him?, yet ?the thought of all life might have been had he been born in any other shape caused on to view his simple activities with a kind of pity.? - The thought that you could be anything in life, but were made in the form of a small insect with wings is disappointing as it limits your abilities to do more in life. The number of possibilities of pleasure for the narrator seemed so large that morning that to be watching a moth, and a day moth at that, appeared a weird outcome, and its enthusiasm in enjoying its lacking opportunities to the full, pathetic. ...read more.

This presents the moth as a commendable character. ?I watched these futile attempts for a time without thinking, unconsciously waiting for him to resume his flight, as one waits for a machine, that has stopped momentarily, to start again without considering the reason of its failure.? ? The moth struggling was something that was so unusual that without considering it might not get back up, the narrator waited mechanically for it to right itself. Much like how when a commendable person that enjoys life faces a struggle, everybody thinks that they will manage automatically and seem to be oblivious to the worst, just because the person doesn?t show fear on the surface. At this point, the moth is helpless after ?perhaps a seventh attempt? to right himself. ...read more.