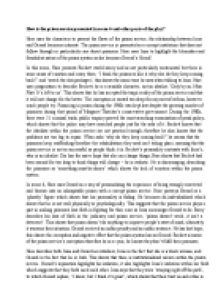 How is the prison service presented in scene 6 and other parts of &quot;Murmuring Judges&quot; by David Hare?

﻿How is the prison service presented in scene 6 and other parts of the play? Hare uses the characters to present the flaws of the prison service, the relationship between Irina and Gerard becomes intimate. The prison service is presented as a corrupt institution that does not follow through or particularly care about prisoners. Hare uses Irina to highlight the blemishes and fraudulent nature of the prison system as she becomes Gerard?s ?friend?. In this scene, Hare presents Beckett world-weary and as not particularly sentimental but there is some sense of emotion and irony there, ?I think the prisoners like it why else do they keep coming back?? and ?watch the s**t-packages?, this shows the ironic tone he uses when talking to Irina. Hare uses pragmatism to describe Beckett; he is a sensible character, not an idealist, ?Only by us, Miss Platt. It?s left to us?. This shows that he has accepted the tragic reality of the prison service and that it will not change for the better. ...read more.

He is discouraging, describing the prisoners as ?something-must-be-dones? which shows the lack of emotion within the prison system. In scene 6, Hare uses Gerard as a way of personalising the experience of being wrongly convicted and thrown into an inhospitable prison with a corrupt prison service. Hare portrays Gerard as a ?ghostly? figure which shows that his personality is fading. He becomes de-individualised which shows that he is not well physically or psychologically. This suggests that the prison service plays a part in making prisoners lose faith in fighting for their case as Irina encourages Gerard to do. Barry describes his loss of faith in the judiciary and prison service; ?prison doesn?t work...it isn?t a deterrent?. This shows that prison doesn?t do anything to improve people?s state of mind, ultimately it worsens their situation. Gerard received an unfair penalty and an unfair sentence. He has lost hope; this shows the corruption and negative effect that the prison system has on Gerard. ...read more.

The facilities are ?Victorian? and outdated which suggests that the prison is inhumane. This shows that the prison is not a welcoming place to be. There is a lack of privacy which suggests that prisoners have nowhere to express themselves which shows the cruelty of the prison system. The stage directions present the prison as an intimidating place; similarly this is described in scene 4 where the prison is presented as unwelcoming and desolate. To conclude, Hare presents the prison system as a corrupt service because it is too large of an institution to care about each and every prisoner. The prison system is full of empty promises, which Beckett is aware of, which leads us to believe that is a misleading service. Hare presents Gerard as an example of experience, being placed in a situation where you have no choice but to do wrong in order to help your family and having no to help you. This shows that in order for there to be reform within the system, prisoners must be heard. This is what Irina strives to do. ...read more.