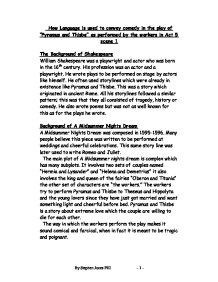 How Language is used to convey comedy in the play of &quot;Pyramus and Thisbe&quot; as performed by the workers in Act 5 scene 1

How Language is used to convey comedy in the play of "Pyramus and Thisbe" as performed by the workers in Act 5 scene 1 The Background of Shakespeare William Shakespeare was a playwright and actor who was born in the 16th century. His profession was an actor and a playwright. He wrote plays to be performed on stage by actors like himself. He often used storylines which were already in existence like Pyramus and Thisbe. This was a story which originated in ancient Rome. All his storylines followed a similar pattern; this was that they all consisted of tragedy, history or comedy. He also wrote poems but was not as well known for this as for the plays he wrote. Background of A Midsummer Nights Dream A Midsummer Nights Dream was composed in 1595-1596. Many people believe this piece was written to be performed at weddings and cheerful celebrations. This same story line was later used to write Romeo and Juliet. The main plot of A Midsummer nights dream is complex which has many subplots. It involves two sets of couples named "Hermia and Lysander" and "Helena and Demetrius" it also involves the king and queen of the fairies "Oberon and Titania" the other set of characters are "the workers." The workers try to perform Pyramus and Thisbe to Theseus and Hippolyta and the young lovers since they have just got married and want something light and cheerful before bed. Pyramus and Thisbe is a story about extreme love which the couple are willing to die for each other. The way in which the workers perform the play makes it sound comical and farcical, when in fact it is meant to be tragic and poignant. The Characters of a Midsummer Nights Dream The workers The workers consist of 6 characters. These characters are: * Quince (director) * Flute * Snout * Starveling * Bottom * Snug Quince is the director of the play, you could say he is the brains behind it. ...read more.

Theseus then tells Philostrate that he will watch the play to see what it is like. Pyramus and Thisbe is meant to be a romantic play where the love is worth dying for. In the end of the play the main characters kill themselves to be with each other, I don't think this was play was picked suitably for the occasion. In a wedding your marriage is meant to be celebration, not the mourning of a tragic play. I also think that Theseus has known this play would be joyous and comical; this is why he has picked the play. Speeches At the beginning of every play the director is meant to give a speech to the audience explaining that he is sorry in advance if anything goes wrong. Well Quince gives this speech, but gets his words in the wrong order and says the complete opposite of what he was meaning. What Quince meant to say was that he does not mean to offend the guests because it is the actors first time in front of an audience and they might be a bit nervous. Quince says that he has come to offend the guests, "If we offend it is with our good will." The word "will" means intention, so he is saying that he has come to offend the audience when he in fact means to say that has not come to offend the audience. Quince also says "we do not come as minding to content you." The word "minding" means meaning, so he is saying that he has not came as meaning to please the audience, when he means the opposite. "That is the true beginning of our end" he is saying that after this it will be the end of their lives because it is so bad. He means completely the opposite of what he said in the speech, which turns the speech into a complete farce. ...read more.

"deceiving me" is Thisbe's cue: she is to enter now" this quotation shows Bottom's ignorance because he could not tell that Theseus was being sarcastic, Bottom thought Theseus was being serious and did not understand the story Bottom then stopped the play to explain to Theseus what was going on. Theseus once again is sarcastic to the workers at the end of the play. He says "Moonshine and Lion are left to burry the dead." He is saying that all the characters are dead except Moonshine and the Lion. Moonshine cannot burry the dead because he was not a real character in the play, he was only representing the moon and the Lion cannot burry the dead since he is not human and would not understand, let alone being able to lift the bodies. Then Demetrius adds "Ay, and Wall too." He is adding on the point that the only characters left alive in this story are Wall, Moonshine and Lion. Bottom doesn't understand the joke which they are saying and thinks that they are all being serious; he tells them that the wall also died since it got knocked down by the fathers. "No, I assure you; the wall is down that parted their fathers." He also asks if they would like to see the epilogue. An epilogue is a verse an actor addresses directly to the audience at the end of the play to tell the audience what happened after the end of the play. "Will it please you to see the epilogue, or to hear a bergomask dance between two of our company." Bottom thinks that they don't understand the ending of the play and is asking if they would like it explained to them. Theseus begs them not to do an epilogue because there is no one to blame since all the character are all dead "No epilogue, I pray you, for your play needs no excuse. Never excuse; for when the players are all dead, there need none to be blamed." ?? ?? ?? ?? By Stephen Jones PHI - 1 - ...read more.